Here are my latest works. I'm sort of obsessed with the idea of shadow boxes and shrines. At the moment I have three more waiting to be completed and I'm off to buy a slew of blank boxes today to be sure that I don't run out before my obsession does.

I usually start with an idea, theme or look I want to achieve but I'm often surprised that my work decides differently and chooses it's own fate. Hmmm, next time I will show the progression of one of my little works and you will see how clearly I allow my art to run in whatever direction it chooses. It must be like how some writers claim their chacters pop into their heads fully formed, chart thier own destiny.

Speaking of characters. I've also made these three little ladies. Mister K found the frames at a local thrift shop and they've been hanging around the house waiting for something to do. I liked the idea of doing a triptic (I love things in groups ... especially groups of three) but nothing seemed to fit. Then after a new baby arrived in the family I began to think of godmothers. Fairy godmothers are some of my favourite "people". I just love the whole idea of them. Anywho, here are my three lovely ladies. 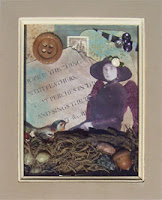