Being the craft enthusiast that I am I usually make a few gifts around the holiday season. My goal this year is to make almost all of the gifts that I am giving and those that I do not craft myself I'm doing my darnest to buy handmade.
Here is some of what I have made so far...

I'm really excited about making everyone on my list something that they will truly like. I know that there will be people who will be disappointed that they are not getting store bought (like my 9 year old cousin who when asked what his hobbies and collections were said "money") but I decided after last Christmas that I am the giver and that means I get to pick what gets given. Those people who are disappointed wouldn't be happy with what I bought them anyway. At least if I craft my Yuletide gifts then it means something to me.
Still have quite a few items on my list but I feel like I have made a nice little dent in the crafting department. When it's all done (hopefully around December 1st) I will take new/better pics of my beautious mound of glorious handmade goodies.
Posted by Missus Knickertwist No comments:

Ah, I used to paint loads of these little eggs. The idea came to me when I was really into fertility magick and I just loved making them. People seemed really pleased with them too. I had quite a few custom orders for these wee things. Here is one of the last ones I painted, and one of my favourites.

My friend sent me this link yesterday. I'm generally not a big photography fan but these photos are so well done and imaginative. I think that they really embrace what childhood play should be. It's wonderfully low tech and dreamy.

We weren't as successful at the Craft Fair as I had hoped. We still sold a few things and that is better than a kick in the head. I was really surprised how freaked out some people were about my Spirit Dolls. Sometimes I forget that people have different tastes and see things differently. I certainly find beauty in places that others might not. I really should know better. My family members are often weirded out by some of the things I think are nifty. Ha! My granny is always saying how much talent I have and what a shame it is that I don't make "nice" things. Although she also thought that my paintings were copies of someones elses originals and was shocked to learn that they come from my own apparently twisted little mind.

Anywho, I've opened up an etsy shop since I'm building up quite the collection of crafted goods. It seems like it may be a nice fit for the types of things I've been working on lately. Ebay was good fun for a while but the fees are a killer and the sellers, unfortunately, are not as supportive of each other as you'd hope. We've never bad mouthed other sellers or their wares. We figure that different people have different ways of doing things and that buyers should decide for themselves. It always makes me giggle a bit when I see people selling magickal herbs and saying "These are not ordinary culinary herbs". Aren't those just as important in magick making? I certainly consider rosemary and basil as two of the most versitile and potent herbs in my witches cupboard. Also the whole "these have been blessed by our high preistess..." gets me too. I don't want other peoples magick getting in the way of my own work. Ah well, as I said, we all have our preferences and I'm sure those things are important to someone.
Posted by Missus Knickertwist No comments:

I'll be selling my wares at the Toronto Waldorf School Candlelight Fair this weekend. I went last year and it was a really interesting experience. Spending most of my youth in inner city and rural community schools, I was awed by the school. The building, the feeling of community and the creative atmosphere... it was a far cry from my experience.

Here are some more spirit dolls that I will be taking with me. It's funny but I usually don't name my work. If I have to pick a title I usually just go with what the item is... "Fairy Godmother #1" or something of that sort. With these little dollies though I've really enjoyed looking at them and discovering their names. Anywho, here are the latest lot.

I've also been making a few shadowboxes to take along. It's been a lot of fun exploring Christmas with these. I've got a couple more in mind so we'll see if insomnia hits tonight so I can get them done to take along too... though I won't hold my breath about that. 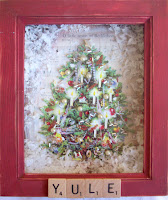 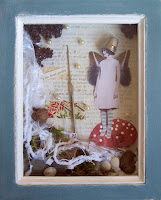 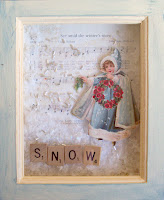 I've been crafting my fingers to the bone getting ready for the gift giving season. One of the gifts I will be giving are these loverly Tub Tea's. They look and smell so pretty and were incredibly easy to make. I ordered the heat seal bags on-line and they are fantastic. Love them! 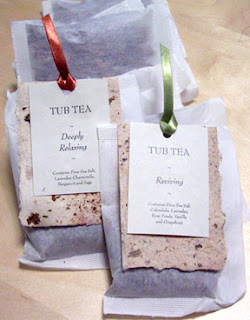 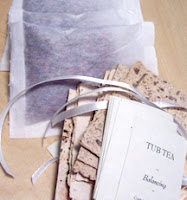 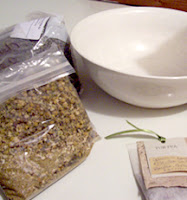 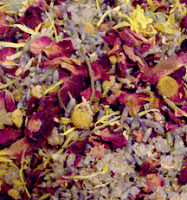 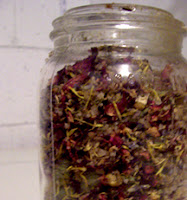 I've mentioned before that I haven't spoken with my father in quite some time. I can't tell you why because I don't know the answer to that myself. My parents were divorced when I was very young. I would see him every second weekend, and when he moved away, I would be flown out to see him. I adored my father when I was little but when I was about thirteen he stopped calling.

I've made contact with him a couple of times over the years. I told him I was getting married, that he has a grandson, that I'm not looking for anything from him. Each time ends the same way. The contact stops as quickly as it began.

It used to be very upsetting for me but I've come to terms with the fact that he doesn't want to be a part of my life, my family, and that there is nothing that I can do change that. I know that I've done all I can and that's all anyone can do.

Mister K has similar issues with the maternal side of his family. His mother used to bake pies for him every week, we would drive up to his grandmother’s house and he would mow the lawn. They had what I thought was a nice relationship. I'm not exactly sure what changed everything. It may have been that she resented that he reunited with his father (her ex-husband) combined with the stress of tragically losing her mate, sadly, we're not exactly sure.

When we were getting married we sent his mothers side invites. Every member from that side of his family declined to come (which was not unexpected). His mother took the opportunity to write a hurtful note on the RSVP card, which basically said 'have a nice life'. When his grandfather died, Granny K begged his brother to be a pallbearer. He refused. When Granny K fell ill they did not visit. When she passed away, they did nothing. The poor thing never understood why her grandson didn't want to be family.

It's easy to say, "Of course you should make amends! That's your grandmother!" or "How would you feel if she died?" but it takes more than blood to make people 'family'. Family IS incredibly important to us because of our experiences with our parents. That is what makes this a particularly difficult dilemma. I can't imagine letting anything get in the way of my relationship with my son. I'd go to the ends of the earth for him. Even when Mister K and I are at heads we know that we can depend on one another. I might get angry with them, I may not like what they do, but I'll love and care for them always. It's a pretty terrible feeling when you feel you can't depend on the people that are supposed to love you the most. I don't want my little family to be hurt any more than they have been, especilly not by people who have hurt us before.

This is going to be a tough one.
Posted by Missus Knickertwist 2 comments: 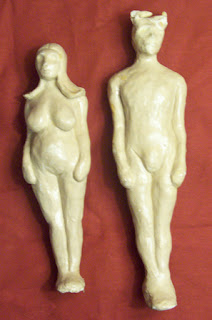 A few years ago I was asked to bring a God and Goddess figure to a ritual. I grabbed some clay and made quick work of it. I was so happy with my figures that they have been sitting on my altars ever since. Last week I decided that my poor, poor, God and Goddess have had enough. The horns on my Horned God have broken off, and are sadly hanging to the side. Ah well, they were only meant to last a day and have given me years of joy.

While working on my new God and Goddess figures I also created some small spirit dolls. These were definitely inspired by some of the beautiful voodoo dollies that I have seen over the years (as well as some the gorgeous art dolls out there). I truly enjoyed making each one of these and really felt as though each one chose how they looked. "What are you making me wear?", "You're not putting that on me!", "This is how I should look!" Sometimes it's best to listen to your work rather than trying to force your ideas. I'm really chuffed with how they've turned out. 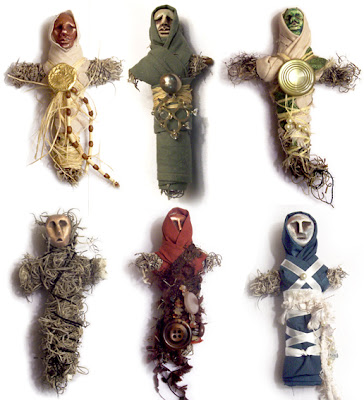