What are little boys made of?

I've put the finishing touches on that wip I showed off a while ago. 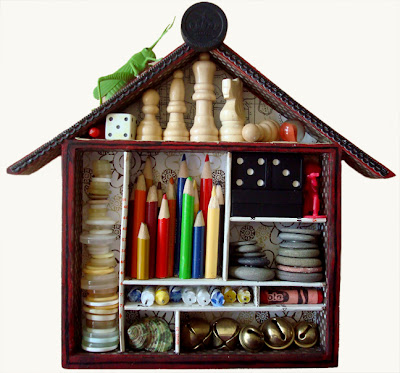 My intention was to make a collection of things that an imp might pick up and hold for safe keeping but things sort of changed direction in the middle. Instead it became a sort of homage to little boys. Lost buttons, skipping stones, birthday candles and missing game pieces, these are what boys are made of. 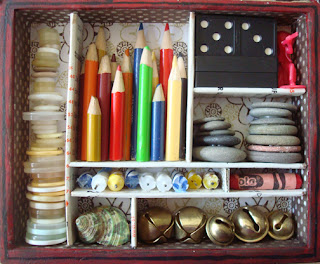 I do like this piece but it sort of makes me a little sad too. I suppose it's all of those the little memories tugging at my heartstrings. Despite all my swearing, I am very squishy and sentimental inside :P 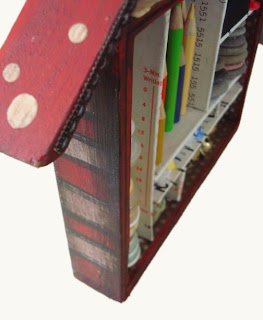 Although I've been completely bombarded with design work and germs this past month, I've started a new project. I'm really excited about it and having a lot fun. It's not in the least bit serious and a complete departure in both medium and subject for me. I can't wait to show it off, though it might not be your cup-o-tea... you'll just have to wait and see *lol*
Posted by Nichola 8 comments:

I'm bushed! Today our kidlet had some friends over to celebrate his birthday. It was a bit of a rushed affair as it wasn't until last week that the kiddo decided that he wanted a Rock'n Roll party. It was a mad dash to pull it all together. I didn't get to cram in everything I hoped to, but there's always next year to do bigger and better :) Anyway, on to the goods...
The invites were done up like backstage passes. 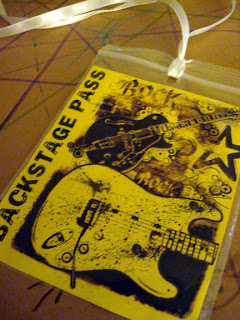 There was a red carpet to greet the kids at the door. 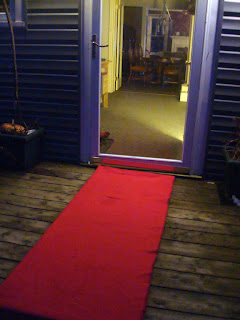 The signs just encouraged them to break in : P 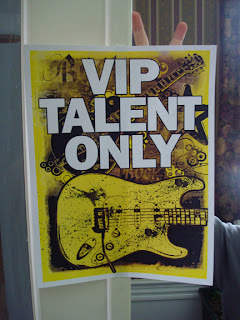 We had a mini photo shoot and I did a 'magazine' cover for each of the kids. I used a white backdrop for easy cropping and made the template so that I could just drop each kids' photo in and change the name. 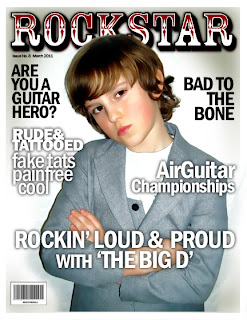 Here they are checking out some of the finished covers.
I covered my drafting table with fresh paper and let the kids graffiti it. It was a good spot for the kids to go when they felt a bit overwhelmed and needed a few minutes of quiet. Boys can make A LOT of noise and be pretty rambunctious. 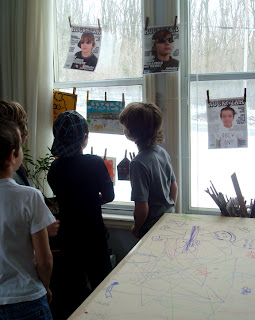 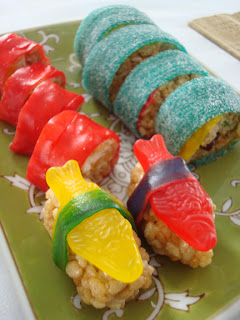 and a mini ice cream bar! D already had 2 birthday cakes (lucky kid!) so we decided not to have another one at the party. 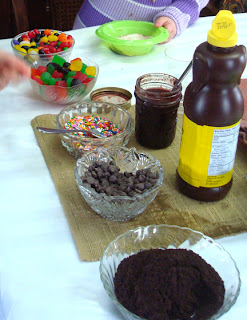 Each kidlet got to take home their magazine cover and fancy swag bag. 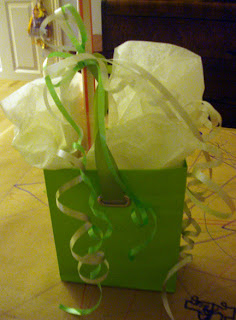 If I had to do it over again (or had more time) I would have organized more activities and given gold records as the prizes. The kids spent A LOT of time whacking each other with balloons and driving the Mr. insane :) 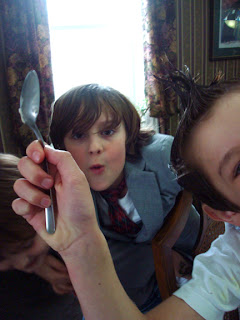 ... but I think the little trouble makers had a pretty good time.
Posted by Nichola 6 comments:

A whole village (& a swamp too)

I'm swamped. I secretly love being busy so you shouldn't feel badly for me in the least. Things might be pretty quiet around here over the next couple of weeks. Don't worry about the silence, it's just me chipping away at my day job.

I managed to make a wee village from the teeny weeny houses I created. It hasn't reached it's destination yet but I think it's safe to share. 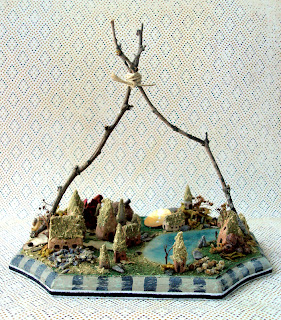 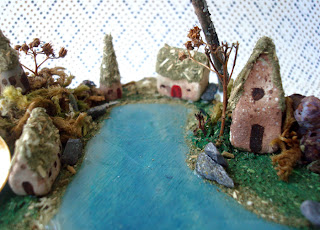 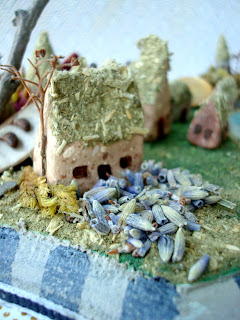 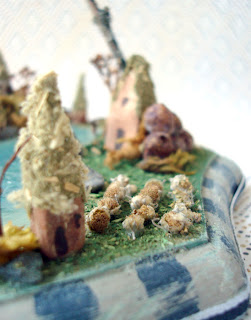 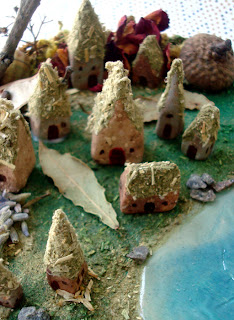 Unfortunately the 'arch' snapped while I was packing it for shipping *insert sad sigh* so the new owner will get the wee village without it's topper. Ah well, I was afraid it would break during shipping so I'm glad I could remove all evidence before it went on it's way.
Posted by Nichola 8 comments:

A Fairy Godmother for Paige

Babies are popping out all over the place! My cousin-in-law just had a little girl named Paige. I've made a fairy godmother for the little one, wand and all, to keep all sorts of good wishes in safe keeping. 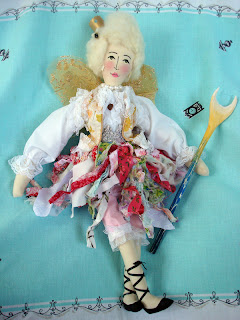 She's got a hoity paper crown on top of her lambs wool hair, and she's keeping a close eye on that felted bee to make sure he doesn't fly into anyone's bonnet. 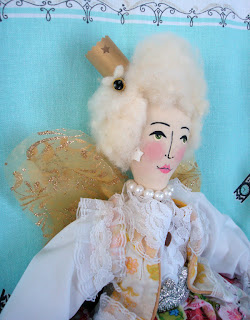 The ragged skirt is kind of special. It contains scraps of fabric from the baby's great-grandmother who passed away a few years ago. If anyone will look over that baby it'll be her "bisnonna" :) 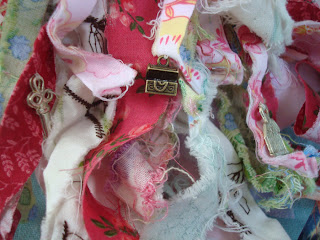 There's all sorts of wishes and charms hidden in her skirt. A key to open every door, a treasure chest for secret wonders, a silvery house to make a home, a lucky coin, extra buttons... loads of things every little girl will need while growing up.
Posted by Nichola 6 comments:

When things don't go as planned 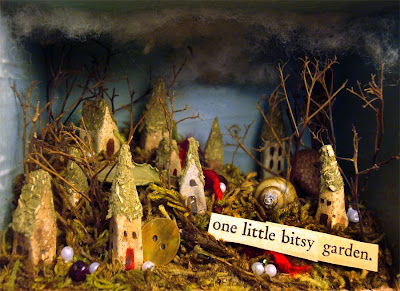 *sigh* In my head there are loads of lovely things fluttering and floating about. My fingers are having none of it this week. They are refusing to co-operate! I was hoping for a lovely little town and on my first attempt, got instead, a sort of depressing village that looks as though it's about to suffer a very bad storm :P
Do you ever scrap something and just start over? I rarely do. Being a stubborn old mule I chip at it and work away until it all fits together. Not this time. This time I'll make a bigger and better village and I'll show these town folk who's boss!
No! It's not my kid... though he thinks so...
It's ME! Grrrrr.
Posted by Nichola 11 comments: