Saint Anne and a Petition for Tranquility 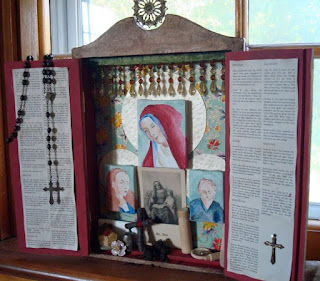 Over the past few years I've come to have a deep respect and awe for the influence and power of the Saints.

Saints aren't just characters in Christianity, they are used by many religious, magical, mystical and folk traditions. Petitioned for special causes, revered for their unique abilities and honored by those they benefact, they truly are a fascinating and varied bunch.

St. Joseph is really interesting because there is a very popular 'spell' that involves him. It is believed that if you bury a Saint Joseph figure upside-down in your front yard that it will help to sell your property. You can even buy kits for this purpose! I've done this twice with great success and have my wee Saint Joseph standing in his place of honor by my front door.

The Saints also play a vital role in Afro-Caribbean religions. Very basically put, slaves, unable to worship their African gods and goddesses adopted the imagery of the Catholic saints and applied the personalities of their own deities. For example, Papa Legba is associated with St. Peter, the keeper of the crossroads/the guardian at the gates of heaven. (Check out Old Religion/New World for a much better explanation.)

I'm using the power of the Saints myself at the moment. I've built a shrine to Saint Anne, mother of the Virgin Mary and grandmother to Jesus. Saint Anne is the patron saint of Canada, housewives, seamstresses and whose speciality is tranquility. 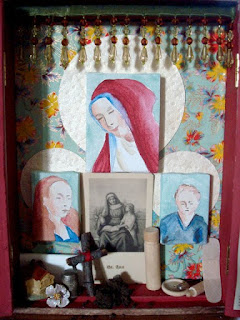 The text you see on the sides are a set of prayers called a Novena. The prayers are for special petitions to the saints and are conducted for 9 consecutive days. 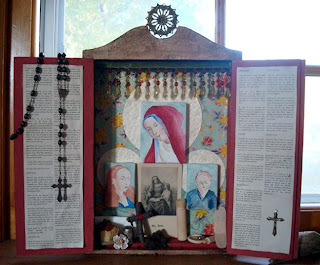 I have faith that Saint Anne will help to restore tranquility to my neighbourhood.

Posted by Nichola No comments:

I'm going to rant again... this time it's serious.

When we moved into our loverly new place we were well aware of the fact that there was a factory of sorts across the street. We were willing to deal with it because we loved the house so much and we can put up with a bit of noise during the day. It's clear that things are not all sunshine and roses around here.

The building is called CB Freezers and they are a blast freezer facility. They are also a 24 hour a day business, something no one told us. No worries, how bad can it be? Truth be told it can be pretty damned bad at times.

I can deal with noise. I lived near a main road in a city of 500,000 people in a house that backed on to a bar and Harley Dealship. This is worse and no one in power seems to give a hoot. Imagine a continual loud hum that alternates 5-10 minutes on/10-20 minutes off from late at night to the wee hours of the morning. One night last month this lasted 9 hours. It's not every night but it's enough to get me pretty pissy.

Here is my problem. I've called the by-law office and have been told that there is nothing I can do because the building is zoned industrial they are exempt from the noise by-law. They can make as much noise as they want, whenever they want, no matter what time of the night or day. Despite the fact that I told the by-law gal that even airports and gravel pits have to adhere to certain guidelines I was told that there is nothin' for me to do but deal with it.

This is all sorts of wrong on so many levels. There ARE laws for noise contamination, so what gives?

A tired me is a mean me and I'm ready to do something. All can do is try right? Let's hope that trying actually gets me somewhere.
Posted by Nichola 2 comments: 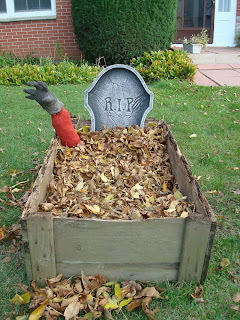 but the Big D and I made this instead. I think it was the perfect project for a beautiful October, Sunday afternoon.
Posted by Nichola 1 comment:

My faith is restored.

I emailed the folks at Rona and they contacted me about the paint issue I had using their Eco-Paint. I'm really pleased about this because it means they give a hoot about their products and their customers.

I'm also happy they did because I had a can of "Cotton" sitting here and I used it on my hallway yesterday. This was a much better experience :) The best part of all was that I managed to do the whole thing in a single coat! I honestly don't think I've ever painted anything with a single coat. 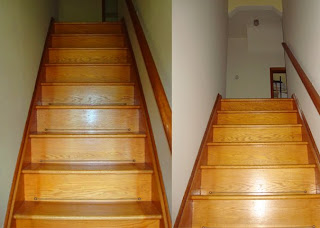 It doesn't look like too much of a change in the photos but we went from a dirty greeny yellow to a lovely soft very pale sort of grey/white which looks much cleaner and less sickly.