# 3. Luchador Series
I've got a good start on 5 paintings. I have to finish at least one before March 8th because it's D's favourite masked wrestler and that's his Bday!:) 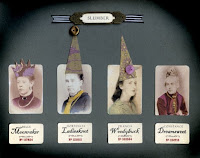 # 4. Fairy Godmother Book
Is done and was put in the post this morning! It took quite a while to finish but I think it was worth it.

#5. Clock
I bought an old clock a couple of months ago and had a round about idea what I wanted to do with it. The perfect push came when I read the craftster challenge for March... craft a favourite song. I'm probably 70% done! 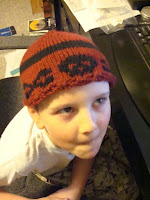 #6. Knit something for D
This was my first crafted project of 2009... I did it on New Years Eve and finished in the wee hours of the morning, A skull beanie

#8. Knit a sweater
I knit a sweater. It's ugly and doesn't fit quite right but it's a sweater and I knit it. Job done. 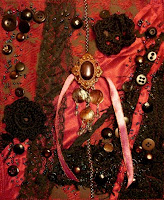 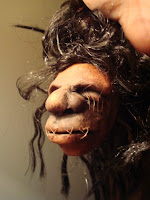 #12. Finish Shrunken Heads
One head is still waiting for it's hair but the other is totally finished.

#30. Try to cook something new once a week (okay, maybe once a month)
We've been doing pretty well at this. Almost every Sunday a we (okay, the mister) have made a big batch of soup to heat up during the week.

#42. Make something teeny weeny
I made a wee fairy tin.

#46. Crochet something other than a grannie square
I'm about 80% through a shrug that weighs about 5 pounds.
I'm pretty pleased with the amount I've managed so far! Let's just hope that the momentum keeps up!
Posted by Nichola