One down... four luchadors to go.

I missed the birthday deadline but that's alright because I'm going to put together a 'swap' package for him. He's terribly jealous of the packages that arrive for his dad and I so I'll make a box of wrestling goodness for him. If I can finish it next week it'll be a great diversion for the long car ride up to Ottawa.

In other news, D had a great birthday. How 6 little children can make so much noise I'll never know. It was a long day and the kids were troopers. The clocks moved ahead, birthday party madness and then a hockey game... that's a lot to ask of a group of 5/6 year olds. 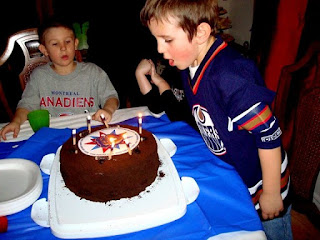 Oh, and BTW those pom poms WERE blue! It was just the crappy lighting in my house that made them look purple. Woo hoo!
Posted by Nichola