Still can't share any awesome crafting *grumble* so I will share a story with a happy ending instead.
For as long as I can remember my mum has loved horses. When I was growing up there wasn't money for much of anything (heck, we didn't even have a phone) never mind money for a filly or riding of any sort. Still, my mum maintained her adoration and would get that dreamy look in her eyes thinking about them. It's the same look some girls get when they talk about shoes and designer clothes. It's the one I get when I think about glitter and collecting old buttons.
For the past couple of years my mum has been going riding and spending time at the stables. She goes to the stable and earns her keep. She shovels poo and does all that horsey stuff that horsey people enjoy. Christ, I'm sure she even does some of the stuff no one in their right mind would want to do because she's so damned horse crazy she'll do anything for the hoofed things.

One day, just a couple of months ago, she excitedly announced that she was buying a horse.

This is the horse she bought. 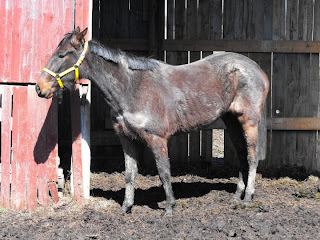 The lady who owns the stable bought the horse in this condition, brought her to the stables, and named her Phoenix. A month after the above photo was taken Phoenix looked like this... 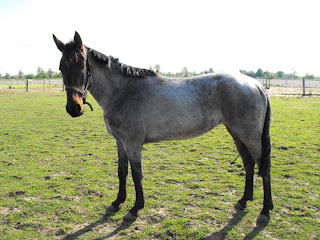 When my mum showed off photos of her new 'baby' there were a number of comments about her changing colour and that she looked "different". I'll admit to being a bit skeptical myself, but she looked like a sweet thing.
Just a few weeks later and Phoenix went to her first horse show. 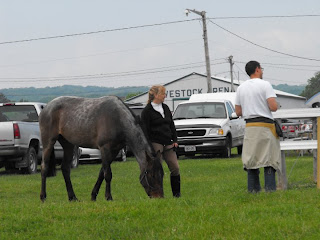 My mum had mentioned changing Phoenix's name but she had never heard the story of the mythical bird. As any Harry Potter fan can tell you, the phoenix is beautiful bird which dies in a burst of flames but is reborn again, rising from the ashes. The stable owner just happens to be a Potter fan. 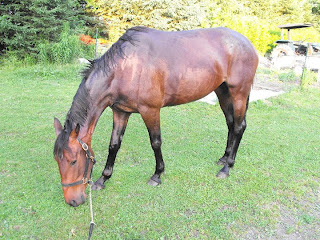 Above is a photo of Phoenix my mum posted today. Just three short months after that first sad snapshot and it seems Phoenix is living up to her name.
Posted by Nichola