You'll have to excuse the rash of puppy posts... I'm sure there will be a few as we settle in.

Our first days with Hunter have been pretty good. He's really bright and is picking up the clicker training well. He can sit like a pro, and we're working on "lay down", "stay" and "high 5". Yesterday he claimed an old fuzzy child chair as his bed and we placed it in his den. He surprised us all at 8:30 when he went in and snuggled down for the night. The whole night!

It hasn't all been sunshine and roses though. Hunter thinks that D is a big playmate and has been really nippy with him. D is completely freaked out. This is not what he thought puppy parenting was about. We're working hard to correct the mouthing and nipping. We're also tell D that Hunter likes him and is trying to play. We've explained that it's exactly like how he wrestles with me and often plays too rough. We're trying to get him to assert himself as a 'boss'. Poor kid, he isn't used to dogs that jump or sharp little puppy teeth. It's difficult because he's becoming more and more afraid of those tiny sharp milk teeth.

We'll work though it. 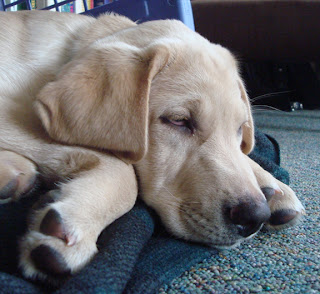