We participated in an art show this weekend and I dragged along the Stargazers Cottage. 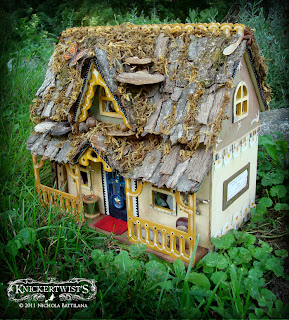 One of my very favourite things about this piece is that prompts people, especially ladies of a certain generation, to share childhood stories and memories. It's such a gift to hear these fabulous gals talk about craft and imaginative play.

One lady told me about how envious she was of her friend's doll house. She described the huge thing and said she remembered that it even had electricity. As a child she was quite certain that her friend must have been very, very wealthy to have such a grand dollhouse. Another dear sweet lady shared her memories of her mothers crafting, about the dollhouse and playthings she had as a girl, and about the arts taught in schools in Nazi Germany. Still another told me about her homemade doll house made out of two cigar boxes.

When I arrived on Sunday the last lady approached me with a plastic bag in hand. She had dug through her basement and found that cigar box house! It had obviously been well loved. The roof was missing, as were the doorknobs, but I ooh'ed and ahh'ed all over it. She told me it had been made in 1943 by her aunt. Many of the little bits of furniture had been lost over the years but there were still a few items inside. Couches and beds made from matchboxes and covered with little bits of fabric.

She mentioned that her children probably wouldn't be interested in the house and that it might very well end up in the bin. *gasps!*

Would you consider a trade for it?
A town in a tea cup perhaps?
Then again, anything at all!
Just please think about it.
Consider it.
If you can part with it, come back and you can pick something out!

She must have thought I was a little bit of a nut really.

Not five minutes later she was back and said I could have it. Have it! My mum was there and told her it was going to a very good home. I literally hugged the wee thing and vowed to love it forever and ever.

It was the absolute kindest gesture. I don't think that lady knows just how much I'll treasure that little place. It is one of my very most favourite things in the whole wide world right now :) 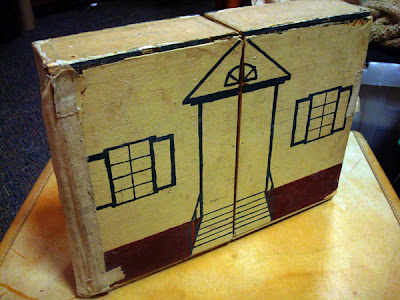 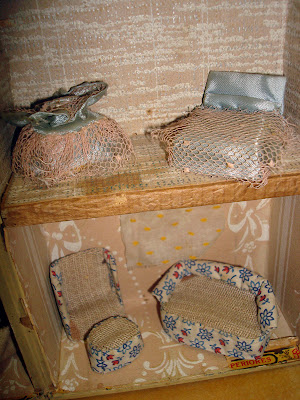