While whispering before sleep last night, my son said that most of the children in his class do not believe in faeries. Certainly he knows they are real (who else would take those treats we leave for them?), but the other boys and girls do not

D had a few questions so I thought I'd share them here... being that he is a terribly bright boy and you might have the same questions too.

What is a brownie?
A brownie is a type of house faerie. They are generally of the 'quite nice' sort. If they really like a family they might fix or take care of things when no one is looking.

Have you ever seen a brownie?
I'm quite sure I saw one scoot under the deck last week.

I thought faeries didn't like to be seen? What did it look like?
They don't. This one was moving particularly fast. I think I caught him off guard. I didn't get a really good look at him but he was wearing brown furs and leather. He was probably about 10" tall.

Did the dog chase him?
No. He was moving very fast and poor Paddy is very dim.

Are there boy faeries?
Absolutely! There are certain kinds of faeries that are ONLY male. I'm not sure exactly how that works but Leprechauns, for example, are only boys.

Does a salt ring keep goblins out?
A ring of salt keeps lots of bad things away. The thing to remember about goblins and other 'bad' faeries is that they really just want to be left alone. They aren't going to sneak into the house and do awful things to you. They mostly act naughty when people bother them.

What is a faerie tree?
It is a tree that the faerie folk either like, are attracted to, live in or near. They protect the tree and it is very bad luck to chop one down as it makes them angry and you do not want the faeries angry with you.

Are there any faerie trees here?
Just the other week I discovered a group of strange trees in the pasture behind us. They are very old, but small and have big thorns growing from them. There is something very special about that bunch of trees. I'm sure that there's something rather old that lives there. What do you think?

I think the tree at the bottom of the hill is a faerie tree.
Why is that?
Because there are lots of holes in it and they might lead to their homes. 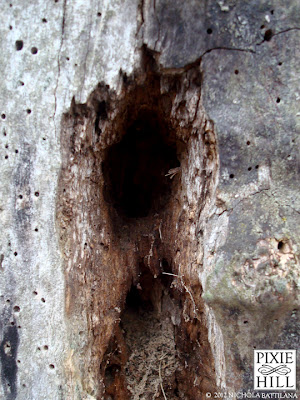 (One of the holes in D's faerie tree)
What about giants?
There are loads of types of faeries. They come in all shapes and sizes. Some are even human sized!

But they wouldn't tell anyone right? Human sized faeries wouldn't want anyone to know they were really a faerie.
Bingo.

And so today the kiddo plans to come home from school and make a tiny sled because he's sure the wee folk would like to go tobogganing down the big hill if there's another snowfall. And really, is there any better thing to do after school? I can't help but feel just a little bit sorry for all those kids who don't believe.
Posted by Nichola