A short while ago I was asked if I'd be interested in doing an interview for a local publication. After the initial outbursts of "Hells bells!" and "Yee Haw!" I warned the writer that I'm actually rather dull and that most of the story would probably have to be made up for interest sake.

Last night the photographer came over to take snaps to go with the article. D was beside himself, and suddenly became very interested in the work his boring old mum does. I told him that he should document what was going on. Here are some of those blurry photos for your viewing pleasure...

D did manage to get just a few photos taken of himself and I'm certain that's all he'll be talking about on the playground today. 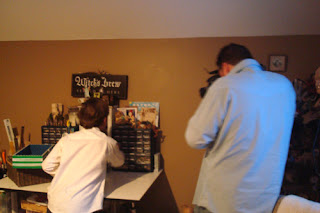 The photographer was disappointed that my studio was so clean which means I now have a valid excuse for keeping the place a mess.
I sure that any minute now someone will discover that I was telling the truth, that there really isn't anything to write about. Someone is bound to say "Who the heck is this chick and why in tarnation are we writing about her?" Until they figure it out, I'll just play along. :P
Posted by Nichola