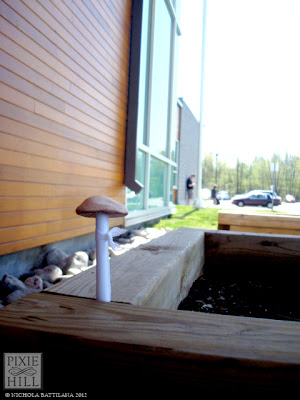 What is this lowly little mushroom? Well, I was lucky enough to squeeze in to the Art House Co-op "Mystery Project". I was sent a surprise prompt and a Prismacolor marker and then set out to make a bit of public art.

My prompt was "If tomorrow came yesterday" and my marker was a sort of brown.... hmmm. What to do!?!?! Panic! Fret! When I finished over reacting, I wrote a nonsense poem with the given theme in mind.


If tomorrow came yesterday,
what would Thursday bring?
Would Tuesday be on Sunday,
and would Santa come in Spring?

If next week was last month,
and October was in May -
would breakfast be at midnight,
and bedtime at mid-day?

If the sun came up at dusk
and the moon came out at dawn,
what time would the fireflies
go dancing on the lawn?

I then made 15 mushroom caps from paperclay and coloured them using my fancy Prismacolour marker. Next, I printed out my poem and rolled it up, holding it in place with a bit of lace. 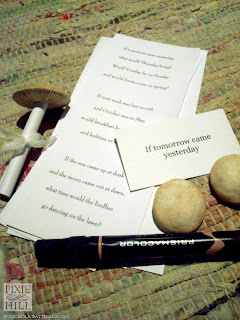 The poems became the stems for the mushrooms/toadstools. 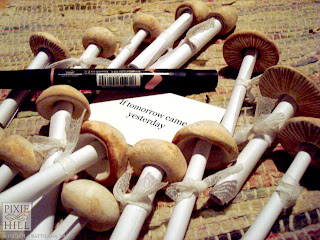 The last step? Hiding those wee things for strangers to find! The one pictured below is sitting outside of the YMCA in Trenton, Ontario. The rest will be hidden all over Brighton this week :)


P.S. Happy mother's to all the great mamma's out there! Hope your tomorrow is grand :)
Posted by Nichola