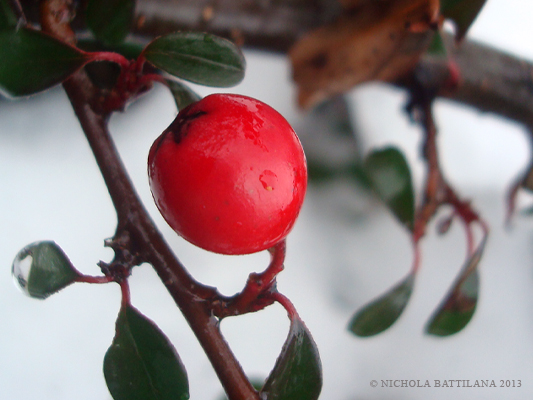 There's something about little red berries. They look like they are probably very delicious.

When D was little, reaching out to those tempting little orbs, we would always say "Don't touch those! Those are faerie berries."

One day, a very long time ago, two children were playing near the woods. After a grand day of romping and hiding and chasing, they found themselves quite hungry. The young boy spied some delicious looking red berries that seemed ripe to be picked. He plucked several off their branches and popped them into his mouth. They were delicious.

His little friend was also hungry and she too grabbed a handful of those berries. Her eyes widened as she realized their sweetness, and she promptly swallowed them down.

The two children found the berries so delicious that they ate and ate and ate. Although they were no longer hungry, they behaved very greedily, and stuffed themselves full.

When the children left for home, the berry bush was bare.

A week passed before the children returned to that same spot. Again they played and played, tiring themselves out. When the sun was high, they realized it was time for their tea and that their bellies were quite empty. Off they trotted to the berry bush.

Just as the boy was reaching out for one of the sweet little fruits, a small man stepped from the bush.

"What do you want? Stay away from my berries!" The little man grumbled.

He was round and gruff. His clothes made of scraps of leather and furs. A bushy brown beard framed his round face. Somewhere in the whiskers two dark eyes twinkled. The man was less than two feet tall but his trident of impossibly large thorns made him an imposing figure nonetheless.

The little girl spoke up sweetly, "Oh please sir, we are quite hungry from playing all day. We only wanted a handful."

The tiny man looked at the children skeptically and said "Very well. If you are hungry, a handful each, but no more. You have been warned!" and with that he pointed his thorny weapon at the children, a sign that he was to be taken seriously. Then the little man turned and disappeared through the berry bush branches.

The children each took one handful and sat beside the bush to enjoy their treat. When they were done they took some more. What harm could a few more berries do? Surely they would not be missed. Then, another handful, and another.

Tummies bursting the children rolled over and fell asleep beneath the empty berry bush.

It was dark when the children woke to the sound of their names being called. Their parents were quite relieved to find them unharmed. The entire search party was pleased to see them and the mood was merry at the happy discovery.

"I warned you!"a gruff voice interrupted the good cheer. The rough little man stepped forward into the torch light. The group was shocked silent, no one dared move. "We fed your children when they were hungry. They gave no thanks or thought. They showed only greed. From this day forth, if any man or child should eat from our berry bushes, the consequences will be... unpleasant." A dark smile spread beneath the little man's whiskers. As he disappeared into the dark of the woods he called out, "You have been warned!"

The townspeople went back and spread word of the warning given by the strange little man. For a long time no one dared touch a berry bush, but eventually the encounter with the little man was all but forgotten. The warning became nothing more than a fairy tale and no one pays much attention to them.

One day, two children were playing near the woods and found themselves quite hungry. The young boy spied some delicious looking red berries that seemed ripe to be picked. He plucked several off their branches and popped them into his mouth. They were delicious.

His little friend was also hungry and she too grabbed a handful of those berries. Her eyes widened as she realized their sweetness and she promptly swallowed them down.

Tummies bursting, the children rolled over and fell asleep beneath the empty berry bush.

This time the discovery of the children was not so jovial.

The search party wept as the little man stepped out of the berry bush once again. With his thorned trident he pointed at one man in the group, the one who had eaten the berries as a boy all those years ago, the father of the boy now laying beneath the berry bush. "I warned you! I warned you!" he sobbed, for the gruff little man was crying too.

The little man was not an entirely heartless or bad creature. He knew how tempting those little berries could be. Out of his grief he gifted the people with berry bushes of their own. Berries they could eat their fill of with little consequence. To ensure that there was always fruit for the wild folk however, he reserved a very few plants just for them. Again he proclaimed that should they be eaten, the consequences would be 'unpleasant'.

And so, to this day, you should always take special care to never, ever, eat from a Faerie Berry bush.

You have been warned.