To soothe a broken heart

I loved Rik Mayall. He made me laugh... a lot... even when life wasn't very funny.

If you aren't familiar with his work look him up and check out his stuff. It's funny, silly, surreal, nonsensical, over the top...

The news of Rik's passing has hit me particularly hard. Really hard. Tears hard. I rarely cry over death, not even of those I know in real life. I'm saddened, sure. Melancholy, yep. But tears are a rarity. Over a celebrity? Never! For some reason this death, HIS death, feels like an immense loss. A real loss that leaves a hollow spot in my heart where he should be comfortably situated forever and ever. Perhaps it's because the world is a little less silly. I really don't know why I've been so affected, but I'm heartbroken knowing he's no longer here.

A long while ago I made a doll that was going to be a wrestler but wasn't really working out. Then he was going to be a swashbuckler, but that didn't happen. Instead he's been sitting in my studio for two years, staring at me, waiting. After Rik's passing I knew what he was. He was Flashheart. 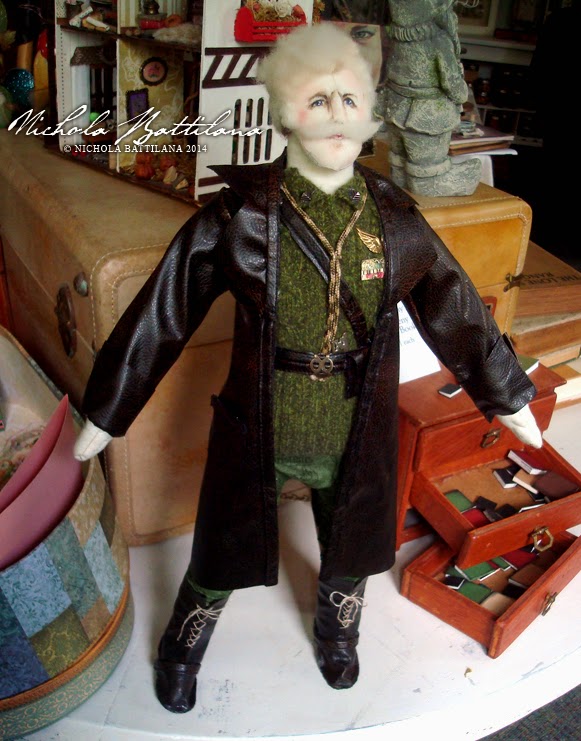 So I've spent the past couple of day dressing this fellow in all of his finery to soothe my broken heart and to have something to cuddle with when I watch Young Ones, Bottom or Blackadder. I'm hoping he'll whisper naughty, silly things that will make me feel just a little bit better.

"Cancel the state funeral, tell the king to stop blubbing, Flash is not dead! I simply ran out of juice! And before five hundred girls all go 'oh, what's the point in living any more?' I'm talking about petrol! Woof!"