My One Little Thing "Hero"

I had a few ideas for this weeks challenge.

1. There was an idea that I had that used stamps... but I seem to have misplaced my stamp stash (a whole flipping tackle box!) and so that I idea was squashed.

2. Next I thought about doing a piece focusing on the many women that inspire me... but the idea was scattered and not coming together.

Then I found this picture of Picasso... 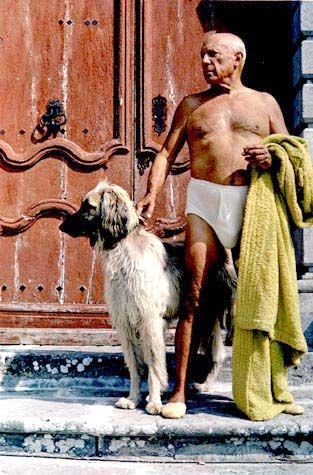 I wouldn't exactly call Picasso a hero. He is one of the greatest artists who has ever lived, but he was also a bit of a dick. However, I could not pass up the opportunity to make a pocket sized Pablo in tights.

So what's the lesson this week? It's okay to be silly in your work. Being silly is a valid way to explore a concept/challenge and opens the door to even more ideas. As an added bonus, it can remove fear and gives you freedom over your own work.

P.S. I watched the documentary Blood Brother this week (it's on Netflix). Ahhhmazing! Rocky Braat is a real hero.