Faerie weapons are used for protection, to cause harm (in the case of malicious faeries like boggarts and goblins), for ceremony, and as tools. As with the other artifacts we have examined, they are made (mostly) of natural materials and difficult to uncover in the wild. 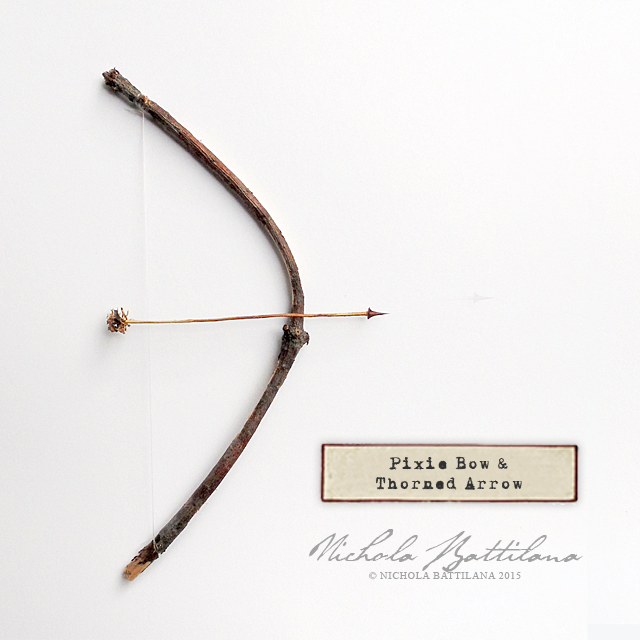 1. Pixie Bow and Thorned Arrow: The Pixie Bow is a lightweight weapon used primarily for protection. The tiny thorn tipped projectile does not cause massive damage, its hit being likened to a bee sting. 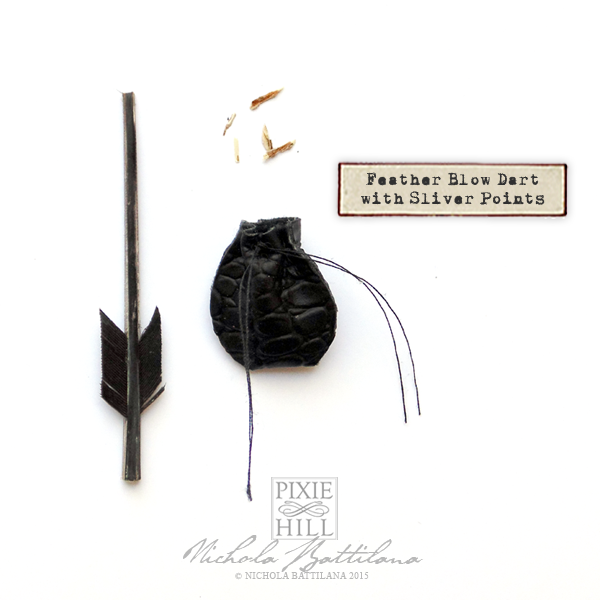 2. Feather Blow Dart with Sliver Points: Made from a hollowed feather shaft the blow dart is an excellent choice for faerie folk who wish to keep their distance and remain silent. Slivers of wood are often used as ammunition. Injury may not be immediately felt but may result in infection. 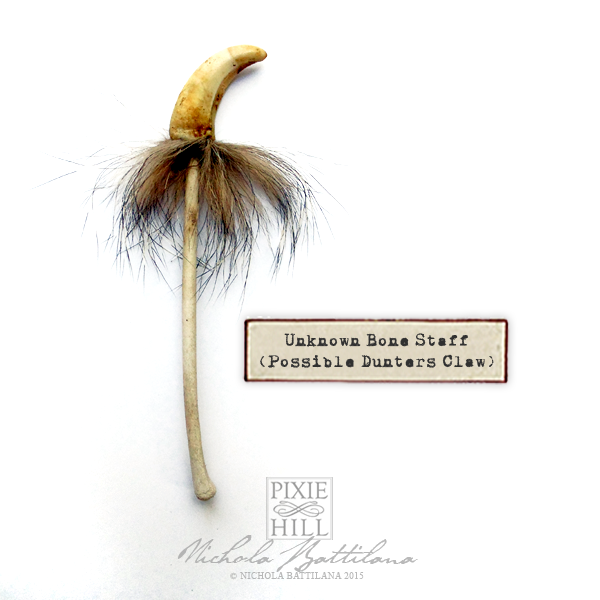 3. Unknown Bone Staff: I readily admit that I am not absolutely certain of the origins of this object. It may, in fact, be a ceremonial artifact. That being said, it is quite possible (and rather more likely) that this claw tipped bone once belonged to a Dunter. This is a logical conclusion as the objects effectiveness as a weapon would being secondary to it's ability to intimidate. 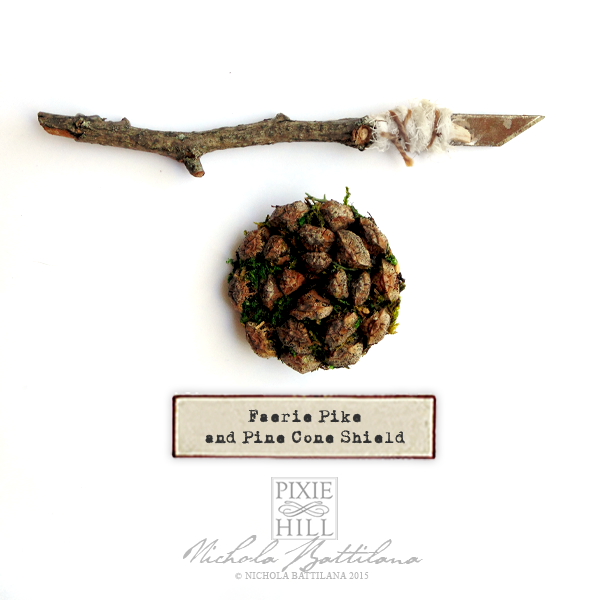 4. Faerie Pike and Pine Cone Shield: An unusual metal tipped specimen. Fair folk are usually reluctant to use steel, preferring shards of glass, stone or sharpened bone to tip their weapons. Whoever created this pike could not resist the allure of a discarded cutting blade. The shield, made from a pine cone has moss embedded between the 'cones'. The moss is likely included for it's healing properties, to pack any wounds incurred during a clash. 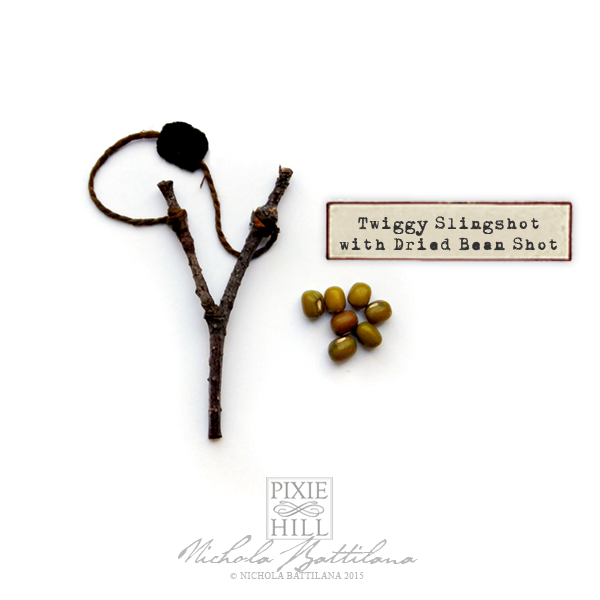 5. Twiggy Slingshot with Dried Bean Shot: A very simple but effective weapon and tool. Commonly used to plant seeds by shooting them into the earth. A favourite weapon to protect against cats. 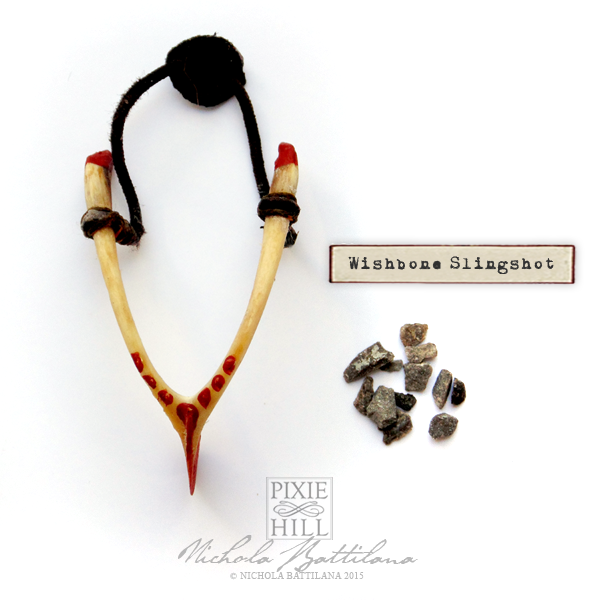 6. Wishbone Slingshot: A stronger, larger version of the Twiggy Slingshot more likely to be used during a ruckus, rumble or rumpus than it's wooden counterpart. 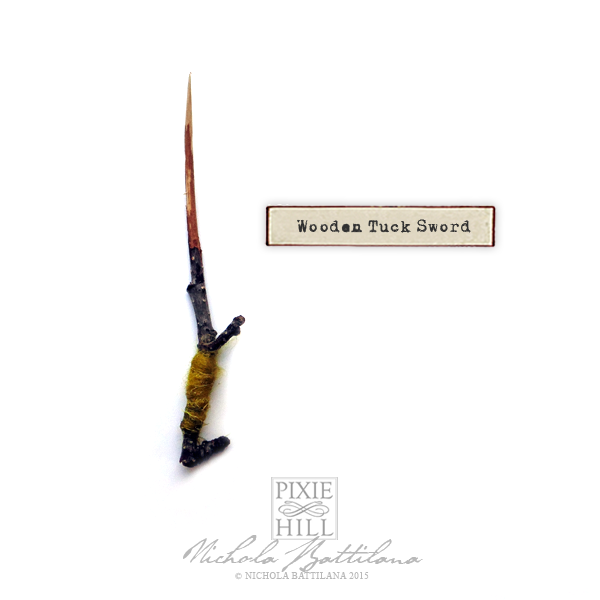 7. Wooden Tuck Sword: A simple point carved from wood with a woolen grip. A common accessory for many little people. It is especially useful for poking, prodding, pricking, piercing, and puncturing.

These artifacts will be on display at Pixie Hill throughout the summer. Open house dates can be found HERE.

Note: Our first open house is this weekend, please be aware the garden/fairy tour is NOT yet set up. The tour will be revealed on July 4th. This Saturday is for studio snooping only.
Posted by Nichola