A few weeks ago I received an invite to visit Medieval Times, Toronto Dinner and Tournament.

Now, I had never been to Medieval Times, and I am a complete and utter dork for renaissance fairs and fairy tale stuff, so I was beyond thrilled. Seriously, I drove my kid and husband bonkers. "Are you excited?!? I'm excited! How can you not be excited?" It wasn't that they weren't excited... it was that they weren't middle-aged-woman-who-never-gets-out-of-the-house-and-can't-wait-to-eat-with-her-hands-and-a-wear-a-crown excited. 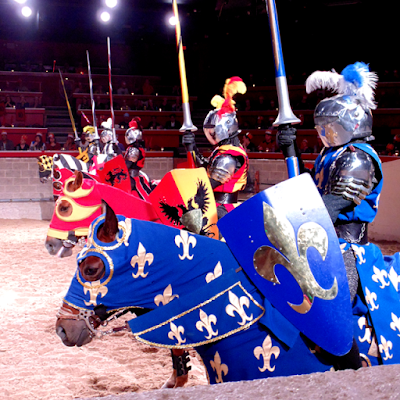 Medieval Times, Toronto Dinner and Tournament didn't just pay for my dinner, they said I can give away a pair of tickets on my little old blog too! So get ready for me to blab endlessly, and then see how you can enter for your chance to win tickets to this jousty dinner and show.

First, we pulled up to the lot and scrounged the $11 for parking. We should have known better since this is Toronto and *I think* paying for parking is pretty much a given. (FYI Toronto is the only Medieval Times that charges for parking.) 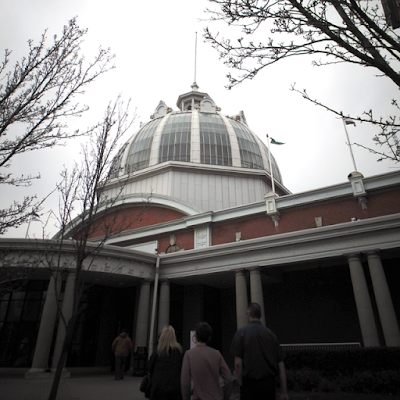 Inside there was a long line up for tickets, but we were ushered in right away.

We were given coloured crowns, then had our pictures taken with the Princess. The picture was terrible but that was totally our fault. Me looking like a demented housewife. The kid with a scowl and eyes half closed. The man trying to look manly next to the princess. We were a hot mess. 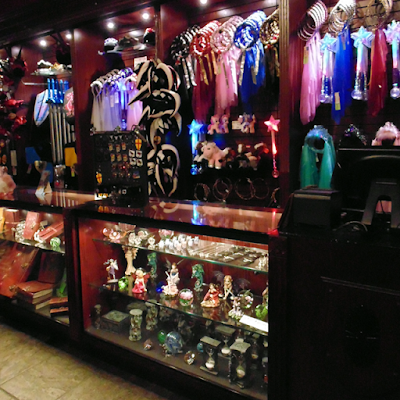 Next, we were ushered into a large hall where you can buy beer and wine, souvenirs, and everything from pink fuzzy unicorns to swords, crowns and dragon hats. I don't really go in for gift store stuff so didn't buy anything. Although... I was tempted to bring this giant dragon skull home. 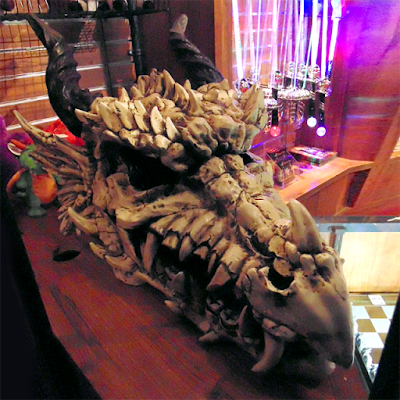 I used this pre-show time to visit the ladies room. I'm a bit of connoisseur when it comes to the loo since I tinkle a zillion times a day. It was very clean, not fancy in the least, but served it's purpose well.

People entered the arena by the colour of their crown. These correspond to the seating sections and the knight you root for. We sat in the front row of the green section. You pay extra to sit in the front row, but in all honesty, with their staggered seating, I'm willing to bet you'd have a decent view no matter where you sat. 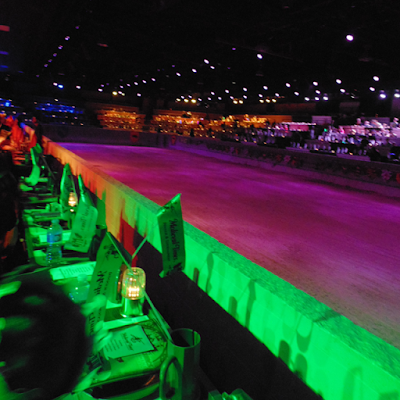 The show started and the feasting began!

Eats include tomato soup and garlic bread, huge portion of chicken, half cob of corn, half baked potato, two beverage servings of Pepsi or water, then coffee or tea, and a pastry.* Some of the chicken was quite dry and we all thought a little bowl of sauce/gravy would have been a great addition. That said, I totally get that this is not fine dining. They're trying to please 100's of people (including small children) with one set menu, serve it hot, and clear it efficiently. They do a pretty good job of it.

*There is a vegetarian meal alternative. If you have little ones you can ask for juice instead of Pepsi. 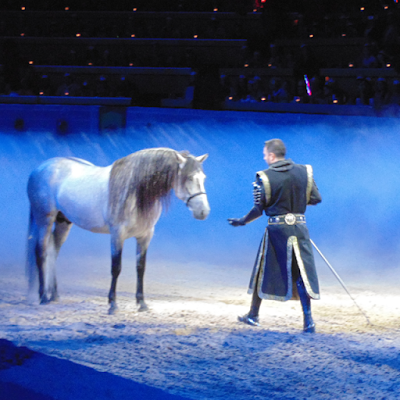 The show plays as food is served/eaten. It is largely horsemanship, skill with a little bit of jousting. There's a falconry element that is very cool. A bit of weaponry combat, some knightly chivalry, and that's it in a nutshell. It was highly choreographed, as it should be for the performers safety, but it was a lot of fun. 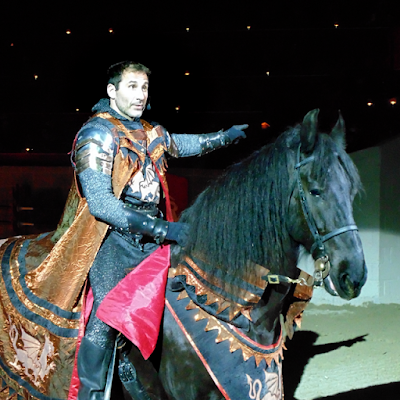 It did not smell like poo or horses. This is one question that kept running though my mind beforehand so there has to be some other weirdo wondering the same thing. My mother is a horse crazed lunatic and her vehicle always smells like horse. I was expecting that familiar odour in the arena. Not a whiff!


If you aren't ok with kids, this is not the place for you. I sat beside a family with two little ones and almost got whacked on the head by flashing light up swords at least a dozen times. This wasn't misbehaving, it was kids doing what kids do in a confined space for 2+ hours when given a flashing light up sword. I'm ok with it. Others might not be. 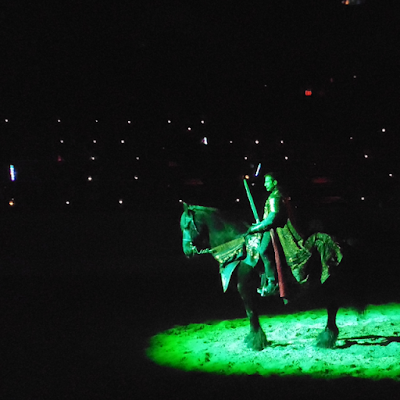 By "sat beside" I mean literally touching the person beside you. Chairs are packed beside one another as tightly as possible. Your space is basically as wide as your place mat. Getting out to use the restroom is a nearly impossible ordeal (as demonstrated by the woman seated next to me climbing over the back of her chair). If you have personal space issues, you'll need to consider this.

I do have one last criticism: the timing of the food. I really wish that there were two serving wenches to dole out the nosh. It would have been nice to have entire courses served at the same time instead of waiting for bread or corn or potato to arrive, while the rest sat waiting on the plate. This is in no way a criticism of our server, Emma. She was an absolute delight and I should have tipped her twice as much as I did. It's simply a matter of needing a second pair of hands.

Anywho, it's a fun option for a special occasion. I've included my criticisms here to provide a full honest review, but overall it was a great time. We really enjoyed ourselves and are totally grateful for the opportunity to visit, for the full bellies, and all the laughs. 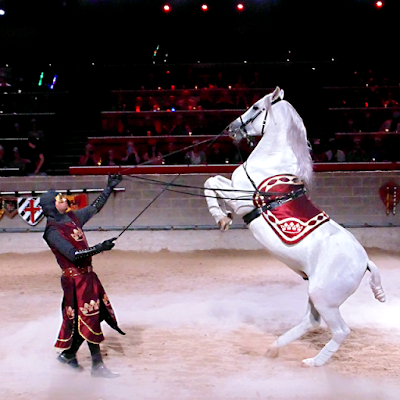 Oh, for the love of biscuits Nichola!
Stop your yammering and nitpicking
and get to the give away!!!!

Geesh! Hang on to your knickers!

For your chance to win a pair of tickets to
Medieval Times, Toronto Dinner and Tournament
comment below with the name of your favourite fairy tale.

One entry per person.
Please ensure that I can contact you via email if you win.
(ie. Don't comment anonymously.)
Deadline is 12:01 est a.m. on Sunday, May 15th, 2016
One entry will be selected at random.
Winner will be contacted Monday, May 16th, 2016
If there is no reply by Wednesday, May 18th, 2016, I will select an alternate winner.