This is all Ramsay Bolton's fault.

A couple of weeks ago I started watching Misfits because someone said Ramsay Bolton was in it, and, in fact, very sweet. I was sure that could not possibly be true. That bastard?! No way. But it IS true! Iwan Rheon is great and I didn't feel an ounce of loathing toward his character Barry Simon. (Acting!) I was hooked and binged all five seasons.

At some point in the series, this vulgar, childish character is introduced and you really just sort of roll your eyes and don't want to like him but he says something outlandish and swears in all the right places and he has tattoos on his bottom and his voice sort of cracks when he's emotional and before you know it you're smitten and have a new imaginary boyfriend covered in doodles.

Then it's all things 'This is England'... then 'Preacher'... then naturally a crafty ode to Joseph Gilgun just sort of happened. 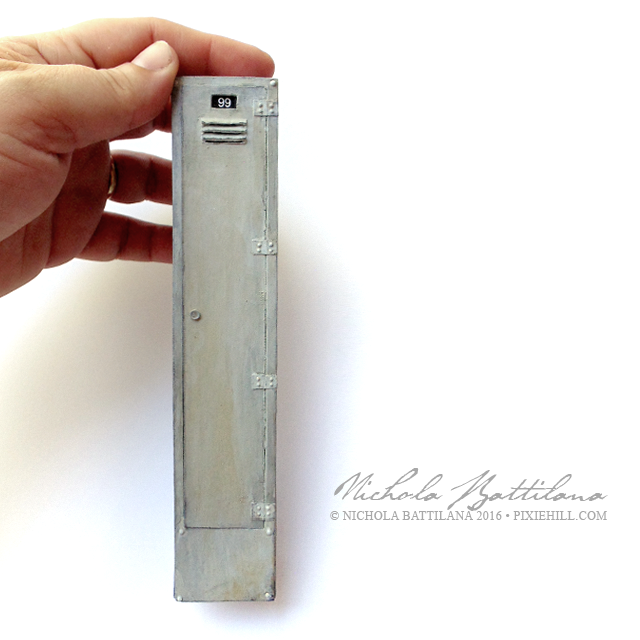 I had toyed with the idea of making a Preacher church but I recently mentioned needing a locker to house my ridiculous, and with a locker room being a major part of the Misfits set, creating a mini-mash-up shrine seemed just the thing. 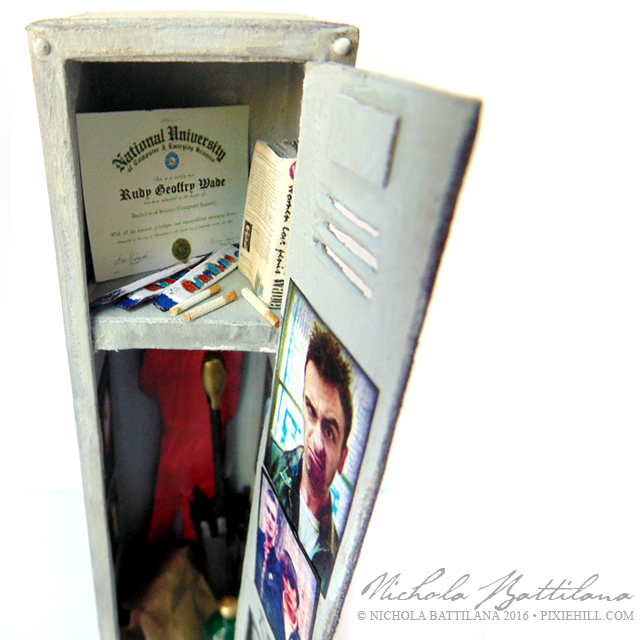 The locker is made from thick card, glue and paint. Shock of shocks, it's in actual 1:12 scale, measuring 7" tall x 1.25" x 1.25". The hinges are just cardboard with extremely small brass dots as grommets. Note: If I can figure out a good hinge system I'll post a tutorial so you can go a little loopy making a locker shrine too. 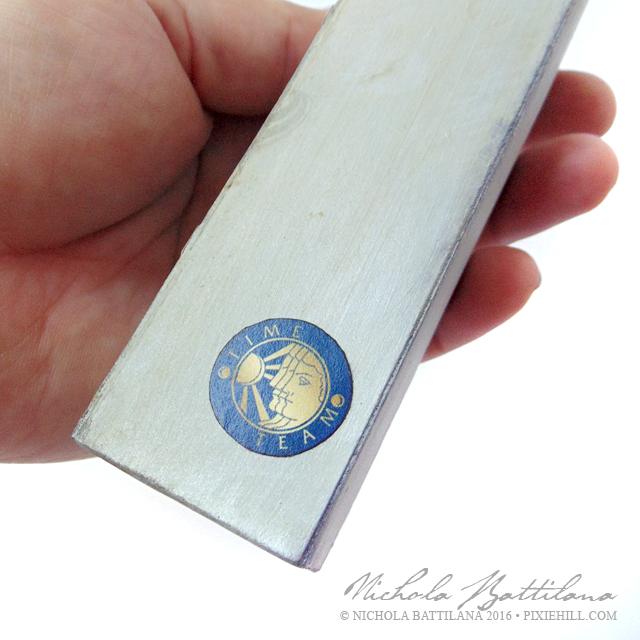 I read an interview in which Joe said he liked watching Time Team so there's that logo on the side. The locker number is the same that appears on his character Rudy's forehead, indicating how many sexual partners he has had (yeah, I know). 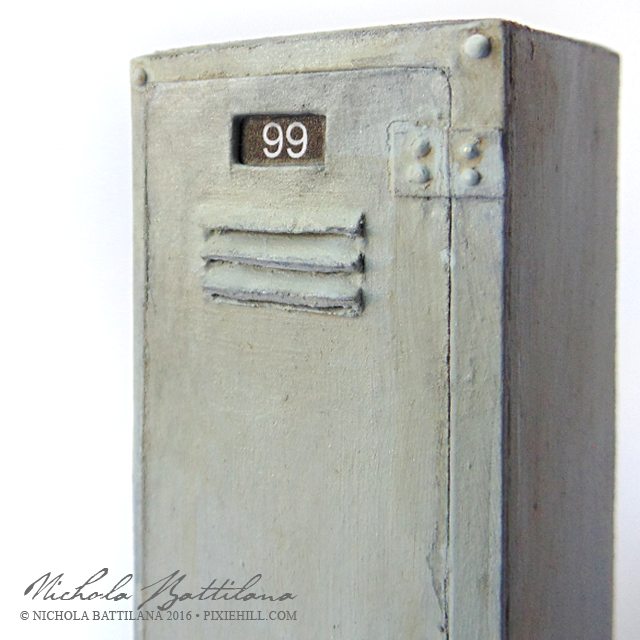 Inside the locker are photos of the man himself *swoon* and a penis doodle on the door for good measure. 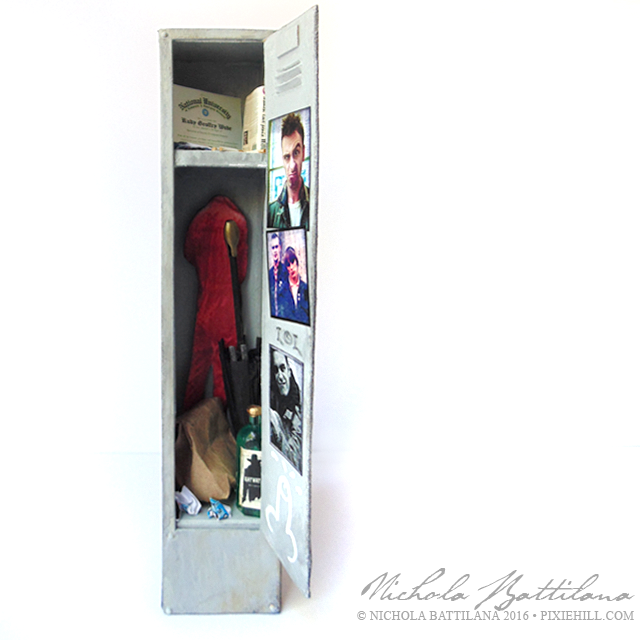 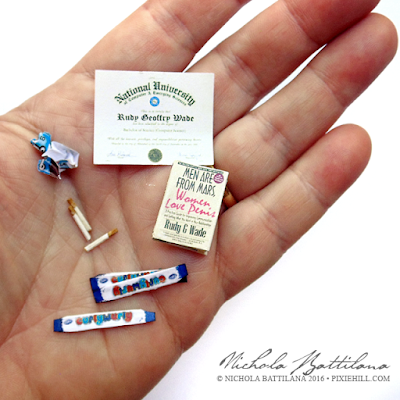 The 'Men are from Mars' book has a new author, Rudy Wade. Yes, the book opens, but the pages are non-sense. 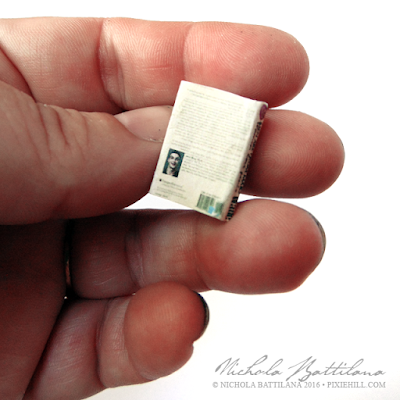 Joe is in the new show Preacher (which is pretty dang good btw) and there's a bottle of Ratwater Whiskey, an umbrella, and a brown paper bag that probably contains very naughty things, in reference to his character Cassidy. 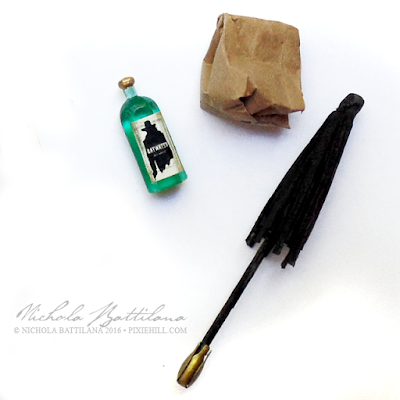 There are a few accessories I'll add later as a nod to This is England, in addition to the photo and "Lol" written on the door. I'd really like to include a pair of miniature Dr. Martens. I remember my first pair of Doc's. I slept in them the day I bought them. My family was certain I'd wear them down the aisle when I got married. I almost did! 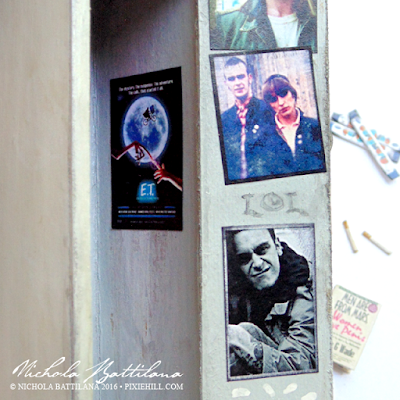 And there you have it! Once again I have lost my ever loving mind, jumped off the deep end, danced a jig and embraced my inner fan girl. Clearly the adoration of a funny, foul mouthed, Englishman, trumps all good sense and housework. 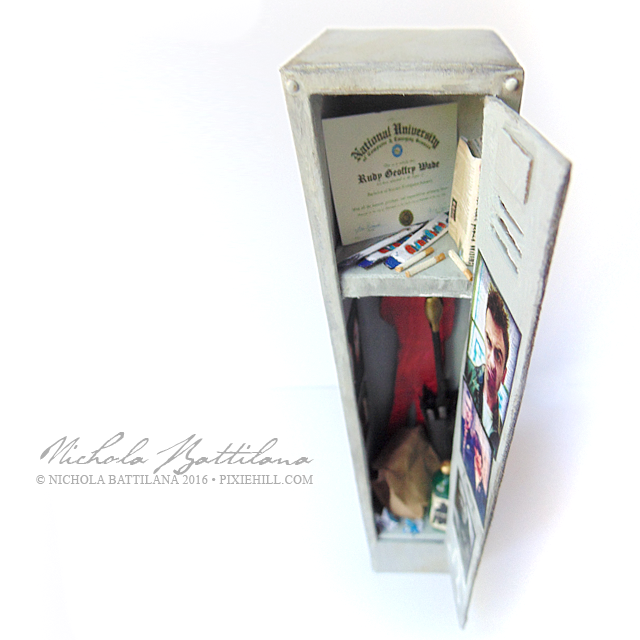 I have been in the studio prepping all sorts of work, tinkering away, waiting for ideas to gel and feeling a little disjointed lately. So, even though this is a bit silly and ridiculous, getting exited about something (anything!) and completing a project has been invigorating and whole lot of fun.

If you ask me, we should celebrate the things we love a little more often.

P.S. Hope you're safe and well and having a splendid day. Here's a big fat hug and a sloppy kiss from me to you XO
Posted by Nichola