I cannot believe that another year has passed and that I am still in the same boat I'm in every other year... last minute Christmas panic.

Today was a hard one because both the fellas were sick. The little one was up puking last night and the big one was asleep on the couch for most of the day. It's crunch time! There should be no sickness during the week leading up to 'the day'.

The wee fella, despite feeling cruddy, was in a rather crafty mood today so we did get some stuff accomplished. Rooting around my craft stash he came across some herbs and oils so we tossed them together to make a batch of pot pourri and tub tea! D even helped design the labels. 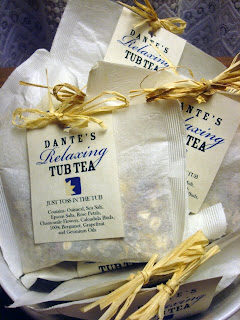 It's not often that my kiddo wants anything to do with making so it was a sort of Solstice miracle that he was the one pushing to do the crafting. Fingers crossed it lasts the week!
Posted by Nichola