First the crafty then the nitty gritty...

I've made a slew of these little gnome hats from some juicy red felt with sweet white stitching. How cute are they? I just might wrap one up and place it beneath the tree for our house elf ;) 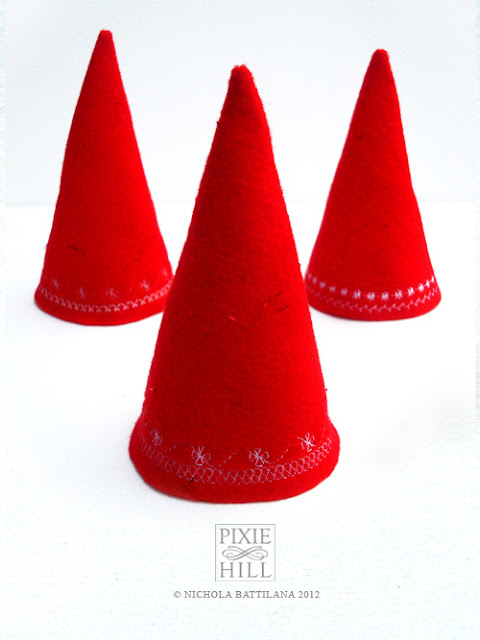 Now, an update on the Halloween Costume vs Black and Orange uproar. A few people have asked if D wore a costume to school on Halloween. He did BUT he looked very much like he does every other day. In the end he decided to go as a zombie hunter, wearing camo, a zombie response tee and an orange hunting vest. No one was the wiser, he wore orange, and he was happy. Win!

Last night we decided to pop into the latest parent council meeting to see what's what and let them know how we felt about that issue. Apparently we weren't the only parents upset by the costume decision as it was already on the agenda. There certainly wasn't a resolution on the issue but I hope that next year they'll re-consider. I have a hard time believing that a better solution, an alternative that is actually inclusive, considering the feelings of everyone, not just the few, could not be found.

At the meeting, I mentioned that we are Pagan. The principal came over after the meeting and asked what 'Pagan' means. It's sort of a complicated question to answer because really, it's just an umbrella term that includes an awful lot of different things. I told her that I identify as a witch but I am not Wiccan. We celebrate the solstices and equinoxes, the changing of the seasons. We look to the old ways. I explained that we live our lives to be as Christian-like as possible, to be kind, to be good and helpful, but we do not adhere to other beliefs of that path. I often find myself completely stumped answering that question.

I've known people from many faiths and those that believe in no greater power at all. There's good and bad in each. In the end, the very best people are those who strive to be happy, gentle and good, who live with a sense of humour and focus on the betterment of their own lives rather than the faults they perceive in others. You? Well, I'm fairly certain you're one of the nicest of the bunch... no matter what your path :)