Last April we bought a hamster.

I am not a big fan of rodents but we were at an auction and the kid was beggin', and it came with all the bells and whistles so I agreed. I remembered when I was a young gal and had guinea pigs and birds... things I could call my own and take care of. Besides, it was such a small addition to our growing menagerie.

First it bit D. I tried to explain that the hamster was soooo tiny that it was probably just frightened. Yeah, the kid didn't care about that bit of logic.

Then it would run in it's wheel in the middle of the night. D would come into our room with sleep in his eyes, woken up by the noise. "He can't help it. Hamsters are nocturnal. He just wants to play." I'd explain.

Soon after he was moved into the guest room where he would 'play' with the ball in his water bottle waking up the whole house.

And so that hamster was moved into my studio where he has been watered and fed and otherwise completely ignored.

Over Christmas a little visitor came into my studio and asked lots of questions about 'the hamster'. I explained that he lived in my studio, away from everyone and was pretty much ignored because he was a bit of a jerk. Later, I felt badly about calling the little thing a jerk. I mean none of that was his fault. So I made up my mind to make nice with the little fellow.

"Maybe you should see if someone else wants him." Mr. Pixie said out of the blue.

"No! We took him. We'll take care of him. I've decided to rename him Beatrice and that we're going to become great friends." I replied. Mr Pixie shook his head.

And so I've been giving Beatrice extra treats and speaking with her while I do my crafting. Tonight I cleaned out her habitat, rearranged her tunnels, arranged everything extra nice and even put in a shiny new food dish. When I was done, Beatrice ran around like crazy and Mr. Pixie put on a squeaky voice saying "What have you done with my space woman?! You f'n changed it it all!" I hate to say it but it really seemed like that was exactly what the furry little thing was saying.

Here's a photo of wee 'Beatrice' with a fat slice of apple, in a sparkling clean cage. 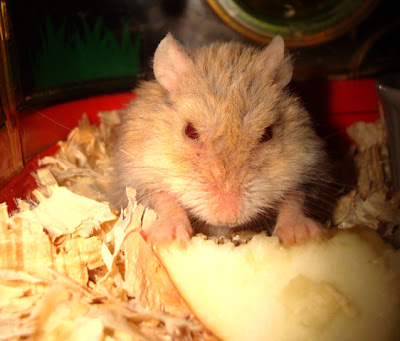 Ummm, perhaps more of a Bellatrix than a Beatrice?

*Sigh*  If I'm honest he looks more like Voldmort and I'm pretty certain that my plan is destined to fail because he is in fact a bit of a jerk after all.

Ah well, if we can't be chums at least I can keep him warm and fed and out of trouble.
Posted by Nichola