I didn't get a "Good morning" today.

Today I was woken with "The duck is gone."

The Professor is missing. 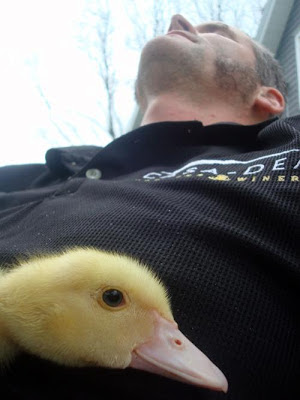 This week the fella was moved into a chicken tractor, a sort of small portable coop that can be moved daily for fresh grass and little mess. We had placed a small tub of water with him and he seemed to be enjoying himself, splashing around in his new diggs.

This morning the end door was found wide open and our dear duck was vanished.

The door that was found wide open has a spring latch mechanism, not exactly the easiest things to operate. We became quickly conscientious about predators when we lost our first chicken three years ago. I'm honestly not sure what to make of the open gate. If it was a predator, well that's something you have to deal with when you raise animals, circle of life and all of that. But if someone opened the gate, which I can't imagine but have to ponder the possibility, it was a terrible and reckless thing to do. The Professor was still just a baby, just getting his feathers, and if someone let him go... well it's a death sentence.

We've walked all over listening for his peeps (poor thing didn't even have his quack yet) but there isn't a trace of him. The very little sensible side of me knows he's gone for good. The crazy and delusional faerie loving optimist is quite sure he'll waddle up to the kitchen door any minute for a cup of tea.
Posted by Nichola