A place for Maman Brigitte

It's been AGES since I've talked about anything pagan-ish but I did a redo of a shrine the other day so I suppose I'll make good and chit chat about it right this minute.

I have several shrines in my house. Unprejudiced in my beliefs, I celebrate gods, goddesses, spirits, saints and deities from a variety of faiths and paths. Some people prefer a singular path, but this mishmash works for me.

Shrines are a space to contemplate, to show gratitude, to ask for guidance... but most mornings I simply light some incense and say a little 'hello'. It's nice. Like a daily visit with friends.

My shrine to Maman Brigitte was in much need of a makeover, so I'd like to show off the much improved sacred space...

Google her and you'll find phrases like "death loa" and "dark goddesses". Those words can be frightening to those who don't fully comprehend their meaning. It's a little unfair. To me, Maman Brigitte has been like a bawdy talking, no nonsense auntie. She's funny, fierce, and will stand by you when you need her support. She is a protector and fair in her judgement... but she'd put you in your place if need be too.

I thought perhaps the same might be true of this shrine. It might seem 'dark' to some. So I'd like to walk you through the items on it, what they are and why they're there. 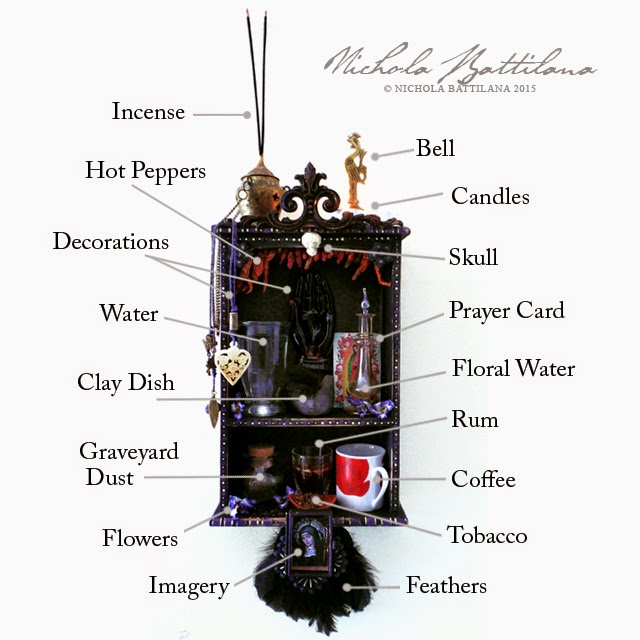 Incense: may be used for a variety of reasons including cleansing or purifying the area, to represent the element of 'air', so that thoughts may be carried upon the smoke, as an offering, to attract or call up spirits.


Decorations: These are simply artifacts, small gifts or tokens that made me think of her.

Water: may be included to represent the element 'water', as an offering, or refreshment

Graveyard Dust: This is earth from a graveyard. Maman Brigitte looks over cemeteries, the departed and in particular those graves marked with a cross. They are sacred places to her.

Flowers: I've used small purple flowers because Maman Brigitte likes purple and what lady doesn't like flowers? If building your own shrine, it's good to keep in mind that flowers and herbs can have different meanings, significance or uses. Hyssop for cleansing, rosemary for remembrance...

Imagery: Maman Brigitte is a manifestation of Brigid.

Bell: This bell is here simply because it has a rooster on it and there is an association with Maman Brigitte BUT bells may be included because they can attract the attention of the spirits (kind of like a doorbell), or chase away negativity.

Candles: represent the element of 'fire', used as offering and for honoring. They are also often used in spells and charms

Skull: Again, a little nod to her connection to cemeteries and the dead.

Prayer Card: These little cards have images of Saints and a prayer on the back. Some spirits are associated with a specific saint or it's imagery.

Floral Water: water infused with essential oils. May be used in spell work or as an offering. This is orange water, smells very nice and is said to lift the spirits :)

Coffee: Another favourite of Maman Brigitte. When I make myself coffee in the morning, I first pour a small cup for those spirits who favour it. A polite 'good morning, I'm thinking of you'.

Tobacco: Maman likes to smoke strong cigarettes. No ciggies on hand this day, so loose leaf tobacco will do.

Feathers: Maman Brigitte is associated with black hens. When we culled a black hen last year I saved a few of the feathers specifically for her shrine.

And that's it in a very simplified nutshell! A shrine is really sort of like guestroom for the spirit or deity. A space filled with sentimental items and things that make them comfortable. There WILL be differences based on peoples personal practice, beliefs, culture or paths... but this is a pretty basic and honest breakdown.
Posted by Nichola