Mr Pixie gave me a little broom ornament with my Hufflepuff house colours. It immediately sparked a need to create a Hufflepuff themed Christmas tree. So I did!!!! 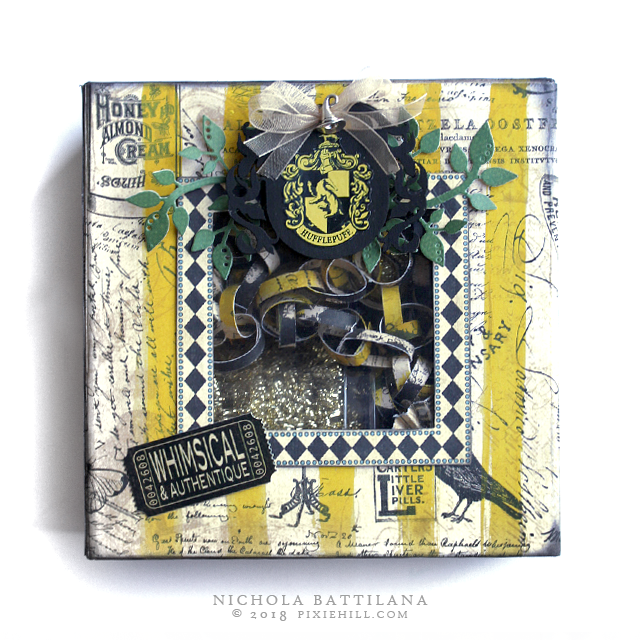 I created a set of decorations and embellished a Deep Square Matchbook Box to store them in. 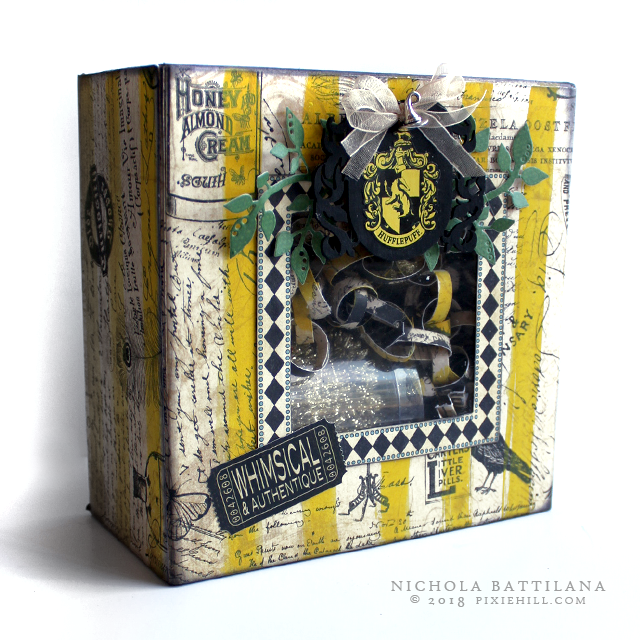 I've used various Olde Curiosity Shoppe—Deluxe Collector's Edition papers for all the bits of this project. To inject a bit of Hufflepuff pride to the exterior, I've simply painted some yellow stripes with washes of acrylic paint. 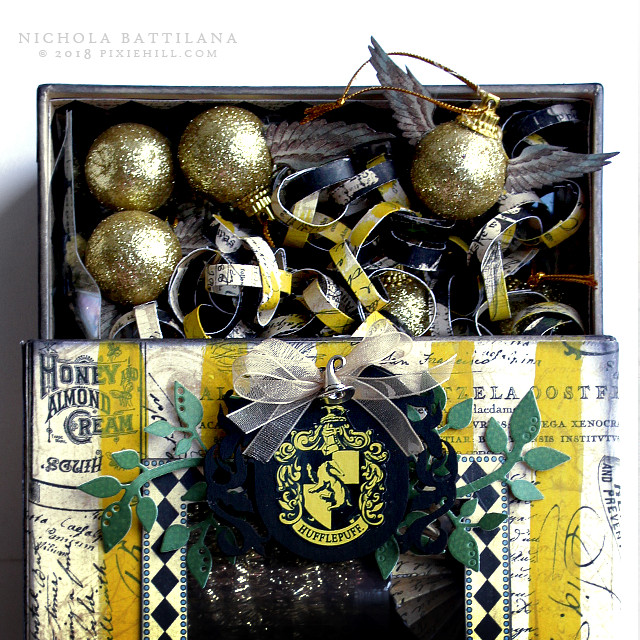 Check out that wee wizard hat charm *swoon!* How perfect!?! 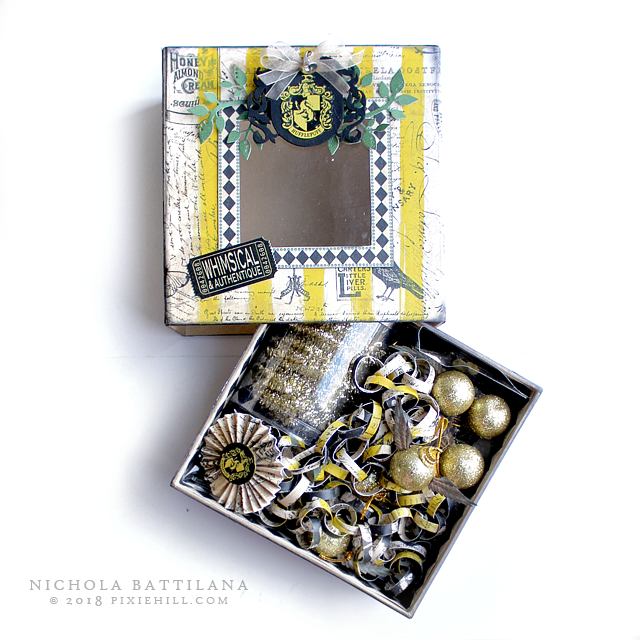 Inside is chocked full of decorations!

Note: The window of my box is covered with a square of plastic cut from a used food container. I glued to the outside of the box and created a paper frame. I did this on the outside so that it didn't catch when sliding the inner box in/out. 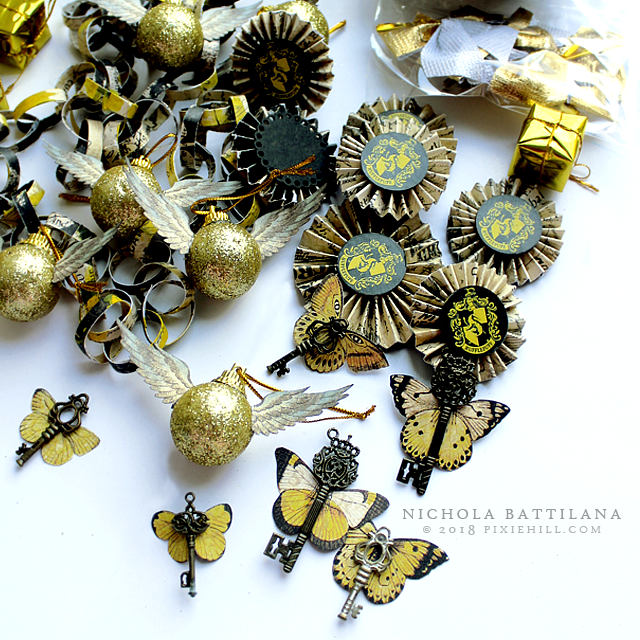 Antique Brass Ornate Metal Keys with Old Curiosity Shoppe butterfly wings added are sweet and simple. (I know, I know... the winged keys were bird wings in the books but I'm sure this is an acceptable compromise since they perfectly reflect my house colours.) 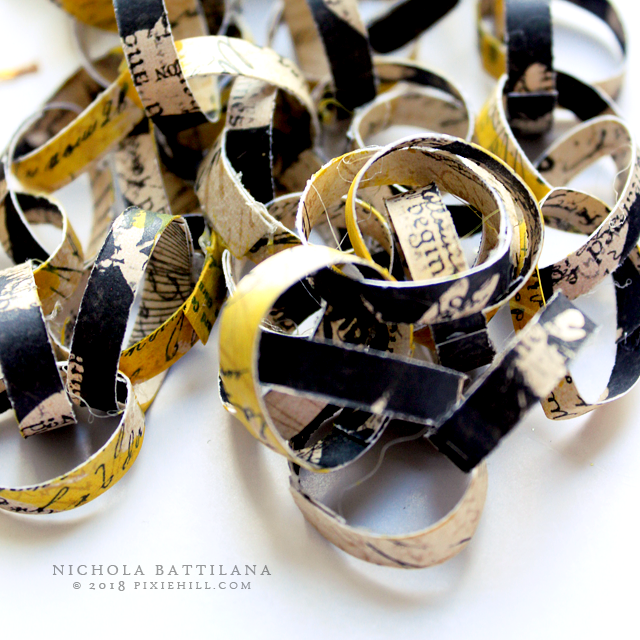 There's a good old fashioned paper chain. I applied a few sploshes of yellow just as I did to the exterior box. 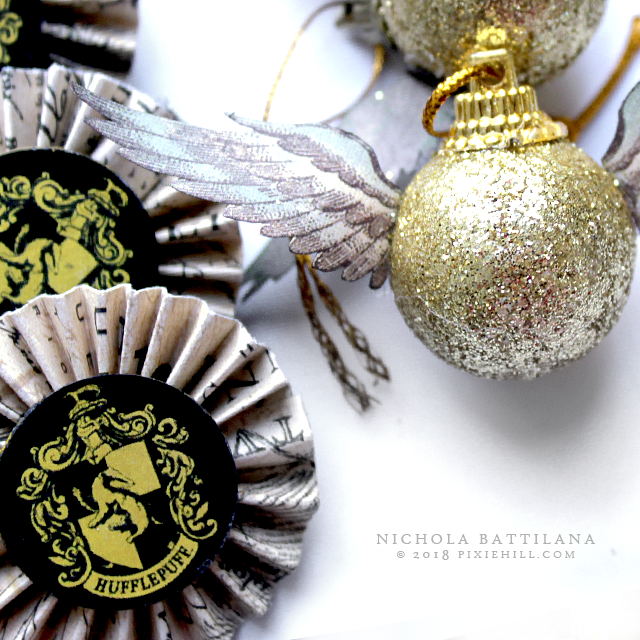 Paper rosettes and, of course.... 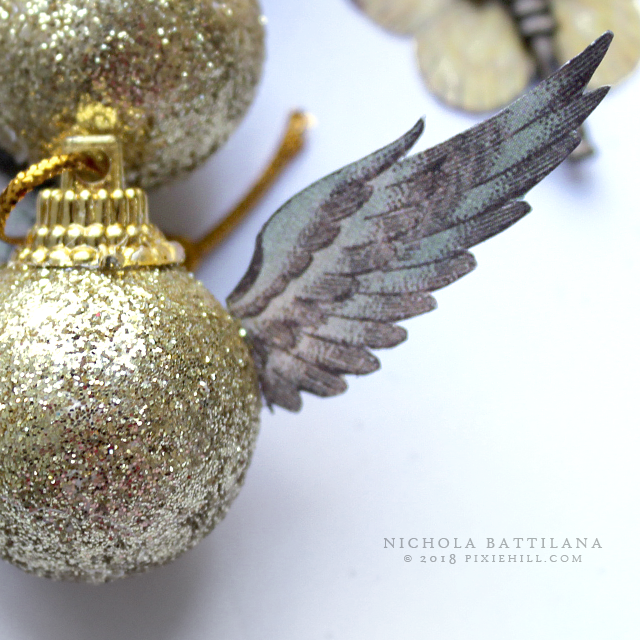 GOLDEN SNITCHES! These are made with flying pig wings from Olde Curiosity Shoppe which have been applied to little glittery baubles. 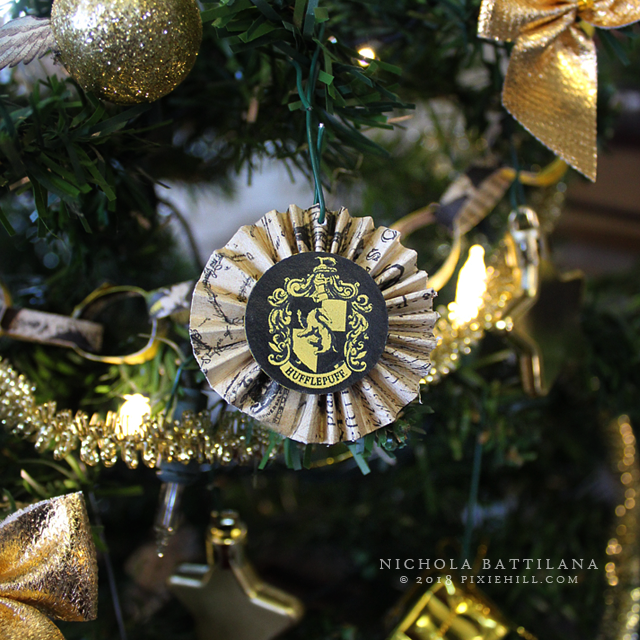 To fill out the tree I've added some gold stars, bows, and glittery garland and how stinkin' cute is the result?! 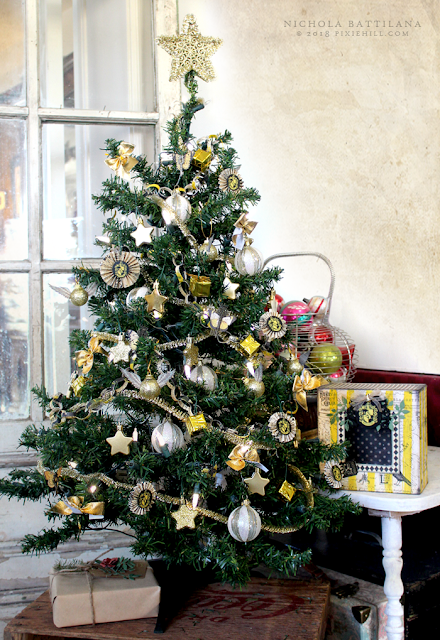 I'm so pleased with this set and I've got loads of ideas floating around for additional ornaments! Perhaps I'll have to make a set for each Hogwarts House. 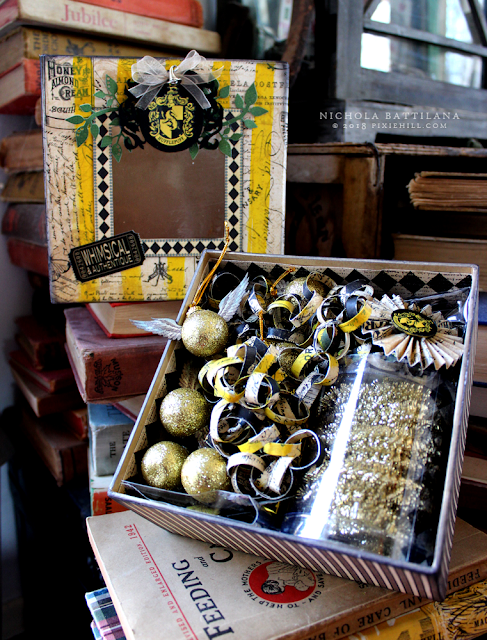 Speaking of being a Potterhead... I've got a couple related pics from my London trip.

I only had a couple of days in London and an insane itinerary. The very first thing I wanted to do was visit Platform 9 3/4 at King's Cross Station. Seeing this as soon as I arrived was a good sign! 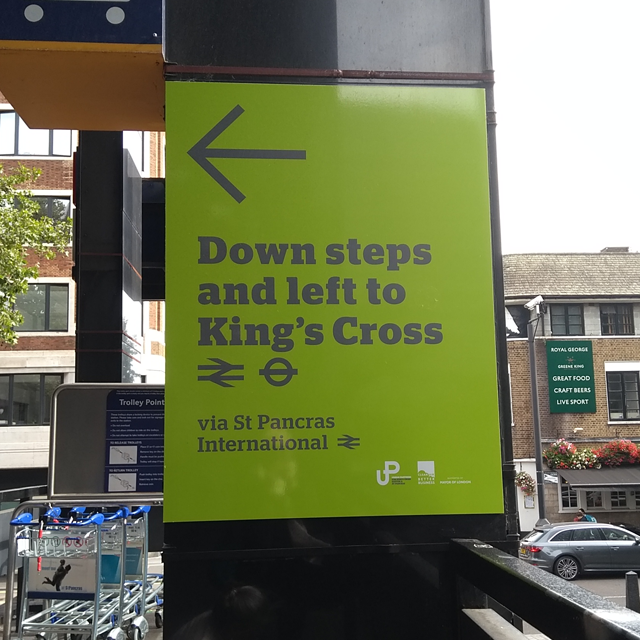 Now, King's Cross looks nothing like the film version of King's Cross. Nevertheless, there is a faux Platform 9 3/4 set up near the Potter shop in the station for photo ops. 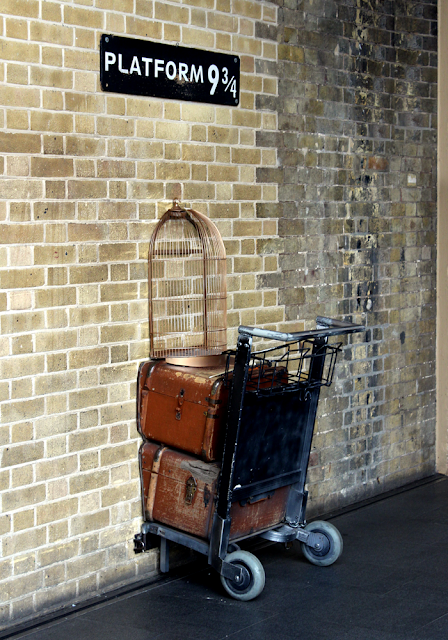 I didn't get a snap pretending to smash through the wall as it was absolute madness there. Seriously, the lineup was CRAZY, as was the shop. I did of course buy a few little Potter bits in the shop and managed the pic above with no one in the way. Huzzah! 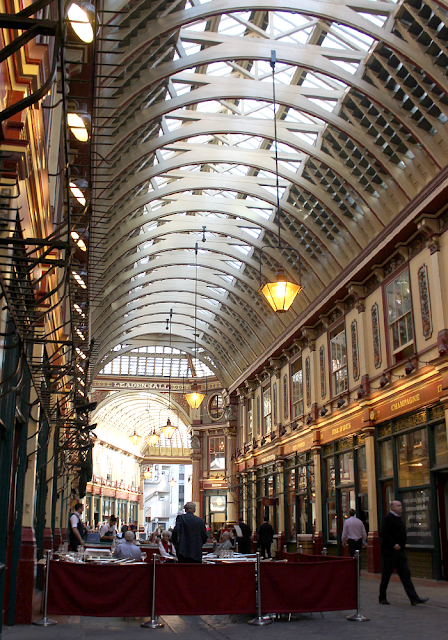 I also made my way to Leadenhall Market, which was the inspiration for Diagon Alley. It was very pretty, but much smaller than I expected. I drank a very nice pint of cider, had terrible fish and chips and bought a book there. The book store being the closest thing to a magic shop there. 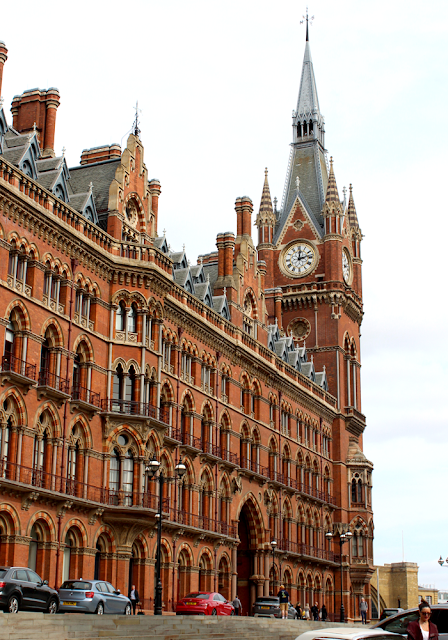 The very last spot I made of point of gawking at in London was Saint Pancras, which plays the role of King's Cross in the Potter films. 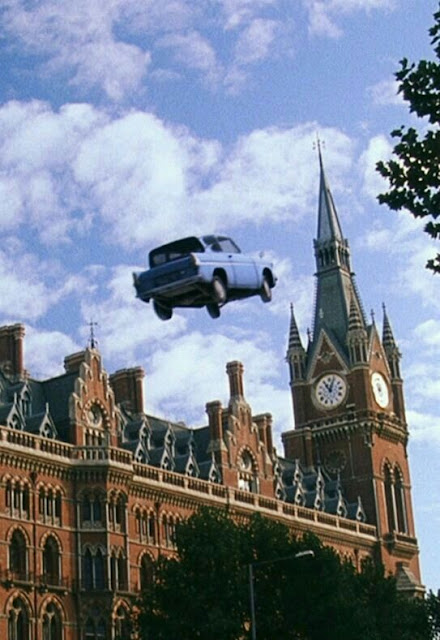 London was absolutely amazing and inspiring and I still have so much to share. I also feel like I'm not nearly done with that city and want to visit again one day.

What would you do with a day in London?
Posted by Nichola